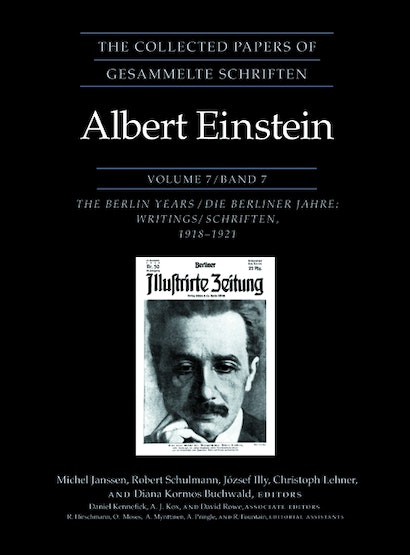 In the spring of 1919, two British solar eclipse expeditions confirmed the correctness of general relativity theory and propelled Albert Einstein to instant celebrity. Before this major turning point, the majority of Einstein’s writings published in this volume dealt with the clarification of general relativistic problems, such as the status of the metric field, the character of gravitational waves, the problem of energy-momentum conservation, and questions of cosmology, such as the nature and size of the universe and the distribution of matter within it. After his rise to international fame, Einstein’s publications changed markedly. He faced an increasing demand for popular articles and lectures on relativity, its development and meaning. He also felt compelled to respond to a host of commentators, ranging from skeptical physicists to philosophers trying to reconcile his revolutionary theory with their views. For the first time, he also responded in print to outspoken anti-relativists, some of them fueled by cultural conservatism and, frequently, anti-Semitism.


Einstein used his newly won fame to lend prestige to political causes, especially to the reconciliation among European nations and to Zionism. In the early years of Weimar Germany, Einstein spoke out vigorously for the young republic, emphasizing the rights of the individual. He agonized over the misery of the Central Europeans in the grip of starvation and economic collapse, praised the support of individuals and groups such as the Quakers, and championed the cause of Eastern European Jews. His rejection of assimilation, combined with a fierce defense of the right of Jews to higher education, led Einstein to campaign for the establishment of a university in Palestine, the land which he conceived of as a cultural center for all Jews.

Michel Janssen is Assistant Professor of the History of Science at the University of Minnesota. Robert Schulmann has been a longstanding editor of the Einstein Papers and Associate Professor of History at Boston University. József Illy was Senior Research Associate at the Hungarian Academy of Sciences. Christoph Lehner is Senior Research Fellow in Philosophy at the California Institute of Technology. Diana Kormos Buchwald is Associate Professor of History at the California Institute of Technology.

"This latest volume documents Einstein's transformation from obscure physicist to international celebrity. Unlike earlier volumes, the focus is not on pure science but on how Einstein used his new-found fame both to popularize his theories and to contribute to the political and social debates of the day. . . . The Einstein Collected Papers is a superb example of scholarly publishing, documenting the words and thoughts of one of the most subtle yet humane intellects of the 20th century. As this volume shows, his insight into both science and society was equally profound."—P. D. Smith, The Guardian