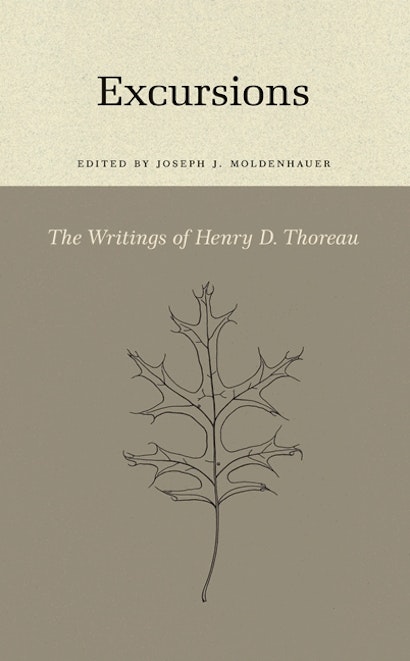 Excursions presents texts of nine essays, including some of Henry D. Thoreau’s most engaging and popular works, newly edited and based on the most authoritative versions of each. These essays represent Thoreau in many stages of his writing career, ranging from 1842 — when he accepted Emerson’s commission to review four volumes of botanical and zoological catalogues in an essay that was published in The Dial as “Natural History of Massachusetts” — to 1862, when he prepared “Wild Apples,” a lecture he had delivered during the Concord Lyceum’s 1859-1860 season, for publication in the Atlantic Monthly after his death. Three other early meditations on natural history and human nature, “A Winter Walk,” “A Walk to Wachusett,” and “The Landlord,” were originally published in 1842 and 1843. Lively, light pieces, they reveal Thoreau’s early use of themes and approaches that recur throughout his work. “A Yankee in Canada,” a book-length account of an 1850 trip to Quebec that was published in part in 1853, is a fitting companion to Cape Cod and The Maine Woods, Thoreau’s other long accounts of explorations of internal as well as external geography. In the last four essays, “The Succession of Forest Trees” (1860), “Autumnal Tints” (1862), “Walking” (1862), and “Wild Apples” (1862), Thoreau describes natural and philosophical phenomena with a breadth of view and generosity of tone that are characteristic of his mature writing. In their skillful use of precisely observed details to arrive at universal conclusions, these late essays exemplify Transcendental natural history at its best.

"Presents newly edited texts of nine essays—including some of Thoreau's most popular and engaging works—drawing from his writing career between 1842 and 1862. The collection highlights Thoreau's early use of themes and approaches that recur throughout his work, including explorations of internal and external geography."—Times Higher Education

"Students of textual editing should study this production as a model of the meticulous layers of investigation required to reach the highest standards of their craft. Thanks to Moldenhauer and the many others who assisted with this work, scholars and general readers now have, at long last, a critical text of Thoreau's beloved nature essays, a text that reproduces as closely as possible Thoreau's authorial intentions."—Laura Dassow Walls, New England Quarterly

"We are grateful to Moldenhauer and Princeton University Press for their continuing dedication to providing modern readers with editions of Thoreau's writings that are sound, beautifully-produced and enduring pieces of scholarship in their own right."—François Specq, Transatlantica

"Because of Moldenhauer's hard work, we know, in so far as it can be known, that when we read his text, we are reading Thoreau. The text is pure Thoreau, but Moldenhauer deserves a world of credit for making it what it is."—Robert DeMaria, Amherst Magazine

"These essays are bound to have a growing impact on American culture. It is a pleasure to have them in this historically informative and scrupulously edited new edition."—David M. Robinson, Thoreau Society Bulletin