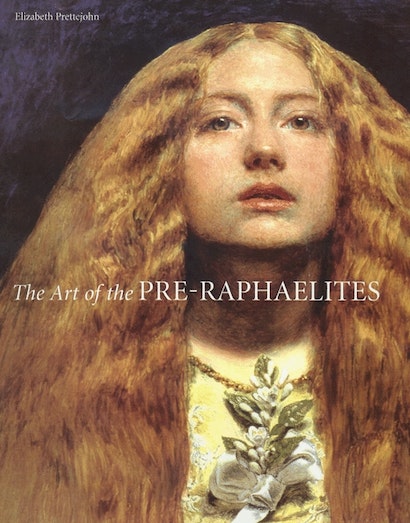 Though always controversial in art circles, the Pre-Raphaelites have also always been extremely popular with museum goers. This accessible new study provides the most comprehensive view of the movement to date. It shows us why, a century and a half later, Pre-Raphaelite art retains its power to fascinate, haunt, and often shock its viewers.


Calling themselves the Pre-Raphaelite Brotherhood, Dante Gabriel Rossetti, John Everett Millais, and William Holman Hunt produced a statement of ideas that revolutionized art practice in Victorian England. Critical of the Royal Academy’s formulaic works, these painters believed that painting had been misdirected since Raphael. They and the artists who joined with them, including William Michael Rossetti, James Collinson, and Frederick George Stephens, created bright works representing nature and literary themes in fresh detail and color. Considered heretical by many and frequently admonished for a lack of grace in composition the group disbanded after only a few years. Yet its artists and ideals remained influential; its works, greatly admired.


In this richly illustrated book, Elizabeth Prettejohn raises new and provocative questions about the group’s social and artistic identity. Was it the first avant-garde movement in modern art? What role did women play in the Pre-Raphaelite fraternity? How did relationships between the artists and models affect the paintings? The author also analyzes technique, pinning down the distinctive characteristics of these painters and evaluating the degree to which a group style existed. And she considers how Pre-Raphaelite art responded to and commented on its time and place a world characterized by religious and political controversy, new scientific concern for precise observation, the emergence of psychology, and changing attitudes toward sexuality and women.


The first major publication on the Pre-Raphaelite movement in more than fifteen years, this exquisite volume incorporates the swell of recent research into a comprehensive, up-to-date survey. It comprises well over two hundred color reproductions, including works that are immediately recognizable as Pre-Raphaelite masterpieces, as well as lesser-known paintings that expand our appreciation of this significant artistic departure.

Elizabeth Prettejohn lectures at the University of Plymouth and is the author of several books on nineteenth-century art, including Rossetti and his Circle and Interpreting Sargent.

"The first combined study of these artists to appear in 15 years. There have been [other] books . . . but not the combined, thoroughgoing overview of their lives, thoughts, and, most of all, techniques that Prettejohn accomplishes here . . . Highly recommended."—Library Journal

"[Prettejohn] suggests a new story about the development of modern art, from Pre-Raphaelitism to symbolism to surrealism to pop art to postmodernism. If that doesn't piqu art book reader's interest, perhaps. . . the luscious reproductions of virtually all the famous and many lesser known but entrancing Pre-Raphaelite masterpieces will."—Booklist

"Who were the Pre-Raphaelites, and what was their art like? Prettejohn . . . addresses these questions with sensitivity, careful attention, and scholarly expertise in this gorgeous book . . . The author argues that Pre-Raphaelite art requires long, close scrutiny. Her book equally merits lingering and absorbing attention."—Karen McCarthy, ForeWord

"A valuable study that will appeal to art historians and those familiar with this seminal movement in English art. The 200 illustrations (many in detail) are all in excellent color."—Choice

"Prettejohn has not only brought together so many of this time period's masterpieces, but has also provided the history and means with which to realize the full impact of these paintings. . . . If reading about art doesn't sound too exhilarating, this book will spark interest just from a momentary view of the enchanting paintings inside."—Felice Ballester, Bloomsbury Review

"Prettejohn's study is well-written, her research and knowledge of the period are commendable, and many of her arguments have merit and originality. . . This book goes a long way in offering some fresh visions of a favorite subject."—Susan P. Casteras, Pre-Raphaelite Studies