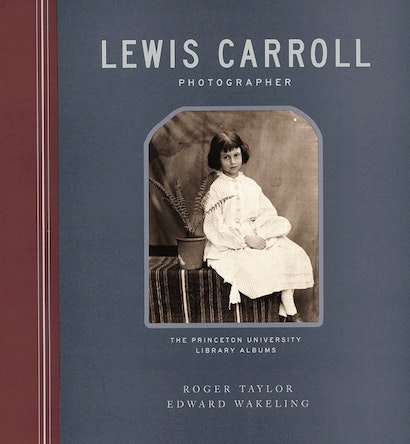 Long before he published Alice’s Adventures in Wonderland, Charles Lutwidge Dodgson (“Lewis Carroll” to the world) took up photography as a hobby. Unlike most of the other amateurs in his circle, he persevered to become a dedicated, prolific, and remarkably gifted photographer, creating approximately 3,000 images during his twenty-five years of photographic activity. This handsomely designed volume makes clear the remarkable extent and complexity of Carroll’s photographic art. It publishes for the first time the world’s finest and most extensive collection of Carroll photographs, many of which have never been reproduced before and are unknown even to committed Carroll enthusiasts.


Roger Taylor’s thorough and sophisticated discussion of Carroll as a photographic artist and as a prominent member of Victorian society reveals the man as never before, illuminating his relationships with the children he photographed in light of the idealism and social conventions of the day. This text, illustrated with exquisite tritone plates, is followed by Edward Wakeling’s fully illustrated and thoroughly annotated catalogue of the entire Princeton University Library collection. It features, in addition to a trove of loose prints, four rare albums made by Carroll himself to showcase his work to friends, family, and potential sitters. Reproduced in album order, these images offer new insight into how Carroll thought about his work — and how he wanted it to be seen.


Compelling portraits of Alice Liddell and other children are presented alongside those of eminent Victorians such as Alfred Tennyson and William Holman Hunt, as well as evocative landscapes, narrative tableaux, and wonderfully strange studies of anatomical skeletons. The catalogue is followed by a chronological register of every known Carroll photograph — a remarkable resource for anyone studying his career as a photographer.


This sumptuous volume is the definitive work on Carroll’s photography. All who admire Carroll and his writing, as well as everyone interested in Victorian England or the history of photography, will find it both essential and irresistible.

Roger Taylor is an independent British photographic historical specializing in the mid-Victorian period. His publications include Crown and Camera: The Royal Family and Photography (Penguin). Edward Wakeling has compiled and edited several volumes of the writings of Lewis Carroll, including the first unabridged edition of Lewis Carroll's Diaries (six of nine volumes are already in print).

"A sumptuous new book. . . . [It] is clear how widely Dodgson's photographic work ranged over the course of 25 years. He photographed landscapes, anatomical specimens and thousands of friends as well as children, taking some 3,000 photographs in all."—Joanna Pitman, The Times of London

"Little girls were not Lewis Carroll's problem. . . . Yes, [he] liked to photograph children. Naked ones, too. [This] studied yet entirely accessible book shows that the children in [his] studio harbored no apprehensions about what they were doing or who they were doing it with."—Frederick Kaufman, New York Times Book Review

"This handsomely designed volume shows the remarkable extent and complexity of Carroll's photographic art."—Joanna Pitman, The Times of London

"This book presents a biographical and artistic reassessment of Lewis Carroll with great finesse. It is beautifully printed with both the text and images rendered on heavy ivory-toned paper. . . As a resource, it is unparalleled in the history of photography and offers a rare glimpse into the life and times of Victorian England. . . . It is clearly and carefully written to appeal to a broad public and impart a new appreciation for the creative genius of Lewis Carroll."—Pamela White Trimpe, The Art Book

"Above all, [Carroll] was a gifted, obsessive and dedicated photographer, one of the best that the medium's first century produced."—Lyle Rexer, Art in America