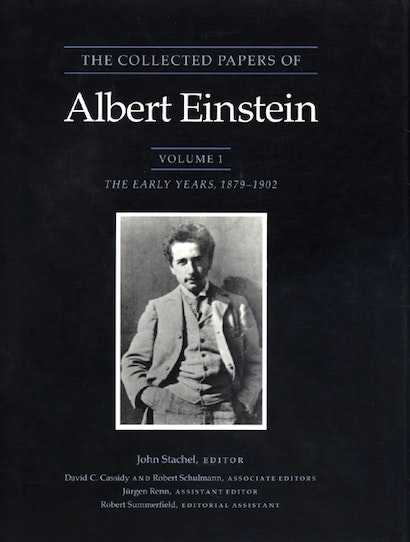 Volume 1 presents important new material on the young Einstein. Over half the documents made available here were discovered by the editors, including a significant group of over fifty letters that Einstein exchanged with Mileva Maric, his fellow student and future wife. These letters, together with other previously unpublished documents, provide an entirely new view of Einstein’s youth. The documents in the volume also foreshadow the emergence of his extraordinary creative power. In them is manifested his intense commitment to scientific work and his interest in certain themes that proved to be central to his thinking during the next decade. We can follow, for example, the beginnings of his preoccupation with the electrodynamics of moving bodies that was to lead to the development of this special theory of relativity. For the first time it can be seen how closely he followed such contemporary developments in physics as Planck’s work on radiation theory and Drude’s work on the electron theory of metals. In addition to all of Einstein’s known correspondence and other writings from this period, the volume includes the relevant portions of all third-party letters and other contemporary documents that provide additional information about his secondary schooling at the Aargau Cantonal School; his four years at the Swiss Federal Plytechnical School, or the ETH; and his search for a job after graduation. Included in the volume are those sections of an unpublished biography by Einstein’s sister, Maja Winteler-Einstein, which deal with his early years; his extensive notes on a physics course he took at the ETH; and previously unpublished photographs of the young Einstein and his teachers and friends.


Documents in Volume 1 portray Einstein’s experiences during the two stressful years after his graduation from the ETH in Zurich. Denied a position as an Assistant at the ETH, he lived a hand-to-mouth existence while he looked for a post at other universities; then he attempted to find a secondary-school post, and finally sought a nonacademic job. Tension with his parents over his plans to marry Mileva Maric is evident throughout this period. With the help of a friend, he finally found work at the Swiss Patent Office, the haven where he would spend the next seven years. Freed from his financial worries, he entered on one of the most productive periods of his life, as the next volume, Writings (1901-1910), will document.

"The volume is attractive, the editing perceptive and informative without being intrusive; the translation, an entirely appropriate and insightful compromise between the literary and the literal."—International Journal of Theoretical Physics