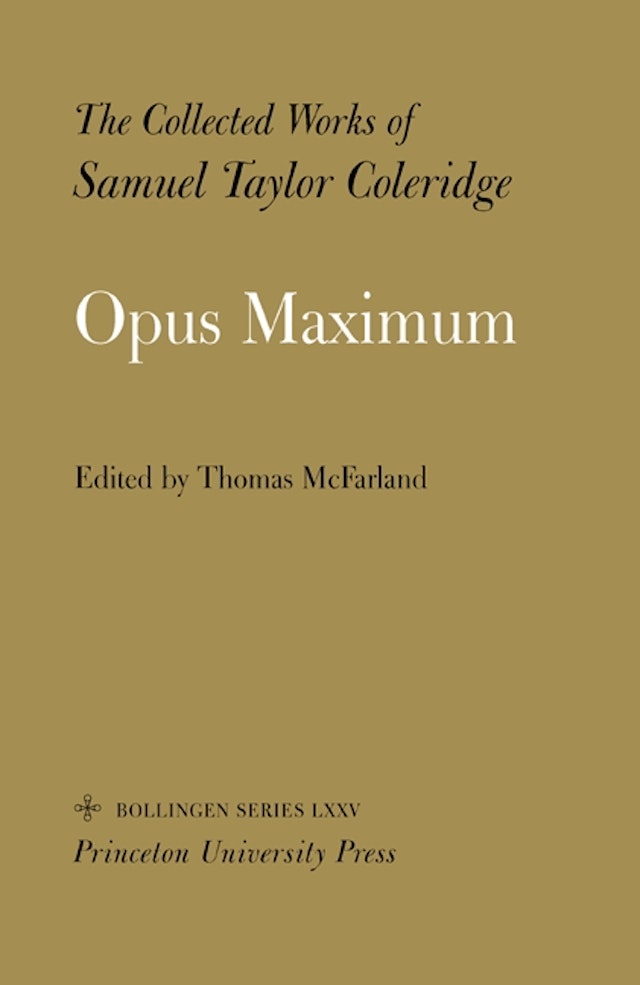 The Opus Maximum gathers the last major body of unpublished prose writings by Samuel Taylor Coleridge. Consisting primarily of fragments dictated to Joseph Henry Green, probably between 1819 and 1823, these writings represent all that exists of what Coleridge considered to be “the principal Labour” and “the great Object” of his life, which he called variously the Logosophia and Magnum Opus.


Dedicated to “the reconcilement of the moral faith with the Reason,” Coleridge’s envisioned Magnum Opus was supposed to “reduce all knowledges into harmony.” While such a synthesis finally eluded him, and the Magnum Opus remained unfinished, the surviving fragments nonetheless bear powerful witness to Coleridge’s engagement with theology, moral philosophy, natural philosophy, and logic, among other disciplines. Among the subjects that will particularly interest readers are Coleridge’s criticisms of Epicureanism, pantheism, and German Naturphilosophie; his attempt to ground reason in faith; and his reflections on personhood (especially in the relationship between mother and child), on will, on language, and on the Logos.


Previously unknown to all but a handful of scholars, the manuscripts presented here provide valuable insight into a crucial period of Coleridge’s intellectual development, as he became increasingly dissatisfied with Naturphilosophie and struggled to affirm Trinitarian Christianity on a rational basis. With this volume, The Collected Works of Samuel Taylor Coleridge, begun forty years ago under the sponsorship of the Bollingen Foundation and the editorship of the late Kathleen Coburn, is now complete.

Thomas McFarland is Murray Professor Emeritus of English at Princeton University. Among his numerous books are Romanticism and the Forms of Ruin (Princeton) and Coleridge and the Pantheist Tradition.