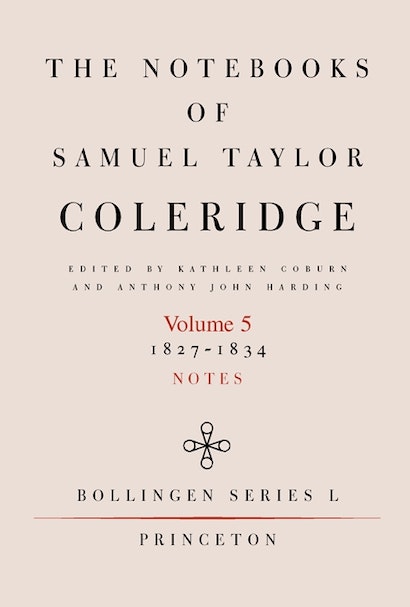 This final volume of Bollingen Series L covers the material Coleridge wrote in his notebooks between January 1827 and his death in 1834. In these years, Coleridge made use of the notebooks for his most sustained and far-reaching inquiries, very little of which resulted in publication in any form during his lifetime.


Twenty-eight notebooks are here published in their entirety for the first time; entries dated 1827 or later from several more notebooks also appear in this volume. Following previous practice for the edition, notes appear in a companion volume.


Coleridge’s intellectual interests were wide, encompassing not only literature and philosophy but the political crises of his time, scientific and medical breakthroughs, and contemporary developments in psychology, archaeology, philology, biblical criticism, and the visual arts. In these years, he met and conversed with eminent writers, scholars, scientists, churchmen, politicians, physicians, and artists. He planned a major work on Logic (still unpublished at his death), and an outline of Christian doctrine, also unfinished, though his work toward this project contributed to On the Constitution of the Church and State (1830) and the revised Aids to Reflection (1831).


The reader of these notebooks has the opportunity to see what one of the most admired minds of the English-speaking world thought on several issues — such as race and empire, science and medicine, democracy (particularly in reaction to the Reform Bills introduced in 1831 and 1832), and the authority of the Bible — when he wrote without fear of public disapprobation or controversy.