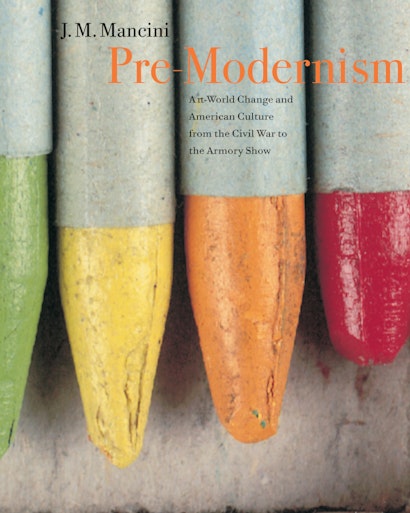 Speaking of the emergence of modernism, author Virginia Woolf famously said: “On or about December 1910, human character changed.” But was the shift to modernism really so revolutionary? J. M. Mancini argues that it was not. She proposes that the origins of the movement can in fact be traced well into the nineteenth century.


Several cultural developments after the Civil War gradually set the stage for modernism, Mancini contends. New mass art media appeared on the scene, as did a national network of museums and groundbreaking initiatives in art education.These new institutions provided support for future modernists and models for the creators of the avant-garde. Simultaneously, art critics began to embrace abstraction after the Civil War, both for aesthetic reasons and to shore up their own nascent profession. Modernism was thus linked, Mancini argues, to the emergence of cultural hierarchy.


A work of impeccable scholarship and unusual breadth, the book challenges some of the basic ideas about both the origins of twentieth-century modernism and the character of Gilded-Age culture. It will appeal not only to art historians but also to scholars in American history and American studies.

J. M. Mancini is Lecturer in Modern History at the National University of Ireland, Maynooth. She has published extensively on nineteenth and twentieth-century American history and culture.

"Pre-Modernism by J. M. Mancini is . . . a beautiful, thoughtfully designed book. . . . It is written by a historian venturing into one of the most hotly contested areas of art history—the origins of modernism. She does so with considerable verve and the result is a fascinating exploration of the American art world in the late nineteenth and early twentieth centuries."—Ludmilla Jordanova, The Historical Journal

"This book will have an audience far beyond the boundaries of art history. It is a refreshing and much-needed change from narrowly focused monographic works and it holds new insights for both specialists and general readers."—Katherine Manthorne, City University of New York