A bold new account of the history of the novel, from ancient Greece to the present 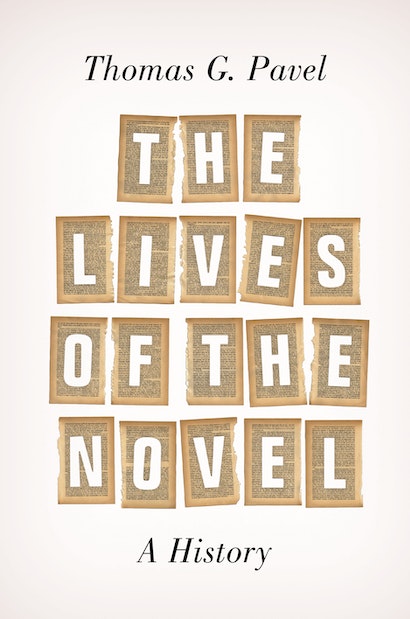 This is a bold and original original history of the novel from ancient Greece to the vibrant world of contemporary fiction. In this wide-ranging survey, Thomas Pavel argues that the driving force behind the novel’s evolution has been a rivalry between stories that idealize human behavior and those that ridicule and condemn it. Impelled by this conflict, the novel moved from depicting strong souls to sensitive hearts and, finally, to enigmatic psyches. Pavel analyzes more than a hundred novels from Europe, North and South America, Asia, and beyond, resulting in a provocative reinterpretation of its development.

According to Pavel, the earliest novels were implausible because their characters were either perfect or villainous. In the eighteenth and nineteenth centuries, novelists strove for greater credibility by describing the inner lives of ideal characters in minute detail (as in Samuel Richardson’s case), or by closely examining the historical and social environment (as Walter Scott and Balzac did). Yet the earlier rivalry continued: Henry Fielding held the line against idealism, defending the comic tradition with its flawed characters, while Charlotte Brontë and George Eliot offered a rejoinder to social realism with their idealized vision of strong, generous, and sensitive women. In the twentieth century, modernists like Proust and Joyce sought to move beyond this conflict and capture the enigmatic workings of the psyche.

Pavel concludes his compelling account by showing how the old tensions persist even within today’s pluralism, as popular novels about heroes coexist with a wealth of other kinds of works, from satire to social and psychological realism.

Thomas G. Pavel is Gordon J. Laing Distinguished Service Professor of French, Comparative Literature, and Social Thought at the University of Chicago. His books include Fictional Worlds and The Spell of Language.

"Pavel has written the most interesting and subtle one-volume history of the novel currently available."—James Wood, New Yorker

"I learned more from the fruits of [the] erudition and study in The Lives of the Novel than I can express."—Paul Kottman, Los Angeles Review of Books

"[D]eft, incisive. . . . Thomas Pavel is a superb guide to the range and enduring power of the realist mode."—Thomas Keymer, Times Literary Supplement

"Pavel's study raises questions that can enrich readings of a wide range of fiction: What does it mean to live a virtuous life? How can humans achieve justice? What is an individual's responsibility to the community? To what extent is self-knowledge possible? These enduring questions infuse this erudite, elegantly written history with passion and urgency."—Kirkus Reviews

"The Lives of the Novel, first published in French as La Pensée du Roman, is a superb work that deserves to be very widely read by academics, students and anyone interested in the novel. . . . [A]stounding and stimulating. . . . [A] generous-hearted work. . . . Intelligent, insightful and astonishingly well-informed, The Lives of the Novel is a major intervention and I imagine that it will become the standard work in this field, and remain so for years to come. Best of all, it was a pleasure to review because Pavel's love of literature just beams out of each page: reading this book is like the joy of meeting a stranger in a crowd at a pop festival and enthusing together about bands you both love."—Robert Eaglestone, Times Higher Education

"Thomas G. Pavel unravels what a novel is in his thoroughly researched The Lives of the Novel: A History. This academic work is fascinating as it delves into the intricacies of the novel and its importance. . . . If you have ever wanted to know how the novel came to be what it is, Pavel is certainly an able guide."—Elizabeth Humphrey, San Francisco Book Review

"Pavel's stunning breadth of reading, combined with reasonable exposition, provides an ample window on one fascinating feature of the tangled bank origins and equally messy performance of the ever-evolving genre we call the novel."—William J. Scheick, English Literature in Transition

"[A]n immense journey of erudition that reads with the ease of fiction."—Nicolas Weill, Le Monde

"The Lives of the Novel is an extraordinary accomplishment, one that few would have dared to attempt and fewer still have had the talent to pull off. At once a work of intellectual and literary history, literary theory, and moral philosophy, all delivered in an unstintingly limpid, flowing, impassioned prose, it constitutes a worthy successor to the efforts of Auerbach, Bakhtin, Lukács, and Watt. It may, indeed, prove a formidable rival to all four."—Joshua Landy, Stanford University

"Brilliant, provocative, and clearly and forcefully argued, this is an instant classic of literary criticism. Addressing nothing less than the history of the novel from its beginnings in ancient Greece to the second half of the twentieth century, Pavel analyzes more than a hundred works, presenting exciting new ways of understanding them and their place in the genre's development."—David Quint, Yale University