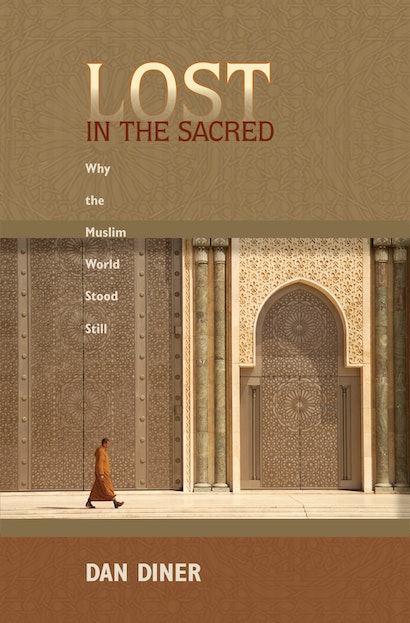 Lost in the Sacred poses questions about the Muslim world that no other book by a Western writer has dared to ask. Focusing on the Arab Middle East, Dan Diner asks what caused the Muslim world to lag behind so dramatically. Is Western dominance to blame? Or is the problem even with Islam itself? These questions, however unsettling, need to be asked — and they are being posed all across the Muslim world today. This book provides cautious answers that are no less disturbing than the questions.

Diner argues that Islam’s cultural stasis is not due to the Muslim faith itself, but to the nature of the sacred it is infused with and that penetrates every aspect of life — spiritual and material. He reveals how the sacred in Islam suspends the acceleration of social time, hinders change, and circumvents secularization and modernity. Diner takes readers on an unforgettable intellectual journey, from today’s global conflicts back into the distant past. He describes the Muslim encounter with the emerging West in early modernity, the challenges Western imperial expansion posed in the nineteenth and twentieth centuries, the time-suspending impact of Arabic as a sacred language, the prevention of print, the classical age of Islam with its dazzling heights of learning and culture — and much more. Diner traces an entangled perspective, combining the spiritual with the social, and the cultural with the political. Throughout, he draws our attention to the urgent need for secularization and modernization in Islam.

The Muslim world is in crisis. Lost in the Sacred explains why.

Dan Diner is professor of modern history at the Hebrew University of Jerusalem and director of the Simon Dubnow Institute for Jewish History and Culture at the University of Leipzig. His books include Beyond the Conceivable: Studies on Germany, Nazism, and the Holocaust and Cataclysms: A History of the Twentieth Century from Europe's Edge.

"All the evidence—yes, all—points to the ossification of Muslim thought and Muslim behavior in the world. . . . [Lost in the Sacred] makes the point clearly and convincingly."—Martin Peretz, New Republic

"[Diner] analyzes how the Middle East, which led in cultural, mathematical, and scientific innovation during Europe's Dark Ages, lost momentum. . . . A deep and thorough analysis of the causes of the problems identified by the Arab Human Development Report that will be of interest to followers of Middle Eastern history and politics and those looking to under-stand the differences with the West."—Deirdre Sinnott, ForeWord Magazine

"Lost in the Sacred offers a very refreshing perspective into the thinking of the Arab world as compared to the Muslim world. . . . This book is invaluable for anyone willing to go beyond the political rhetoric and understand the multiple factors that brought on the ossification of Arab society and, to a lesser degree, the Islamic world."—Tarek Fatah, The Globe and Mail

"Diner seeks to explore and understand the nature of the sacred in Islam through a combination of historical overview, socio-cultural reflection, politico-economic consideration and analysis of the role played by knowledge, language and speech in the formation of the Islamic worldview."—Muhammad Khan, Muslim News

"Diner's connection of various dates, places, and persons flowing together in a polished narrative. He fills his relatively short book with an abundance of information that manages never to overwhelm."—Joshua Arnold, Common Review

"This book makes an exceptionally important contribution to our understanding of the Muslim world. . . . It can be highly recommended."—Mia Roth, European Legacy

"Dan Diner's breadth of knowledge, capacity for clear and broad interpretation, and stylistic sovereignty will no doubt make this a classic in the field."—Anson Rabinbach, Princeton University

"A controversial but refreshingly un-Anglo-Saxon search for answers to some outsized questions."—Michael Cook, Princeton University

"Lost in the Sacred offers a broad synthesis on a key problem of the contemporary Middle East, hence of the world at large. It sets out to describe and account for a strange historical phenomenon: how is it that the Arab world so slowly changes—nay, came to some sort of a standstill? Diner handles the best sources and secondary literature with great skill and literary talent."—Rémi Brague, author of The Law of God