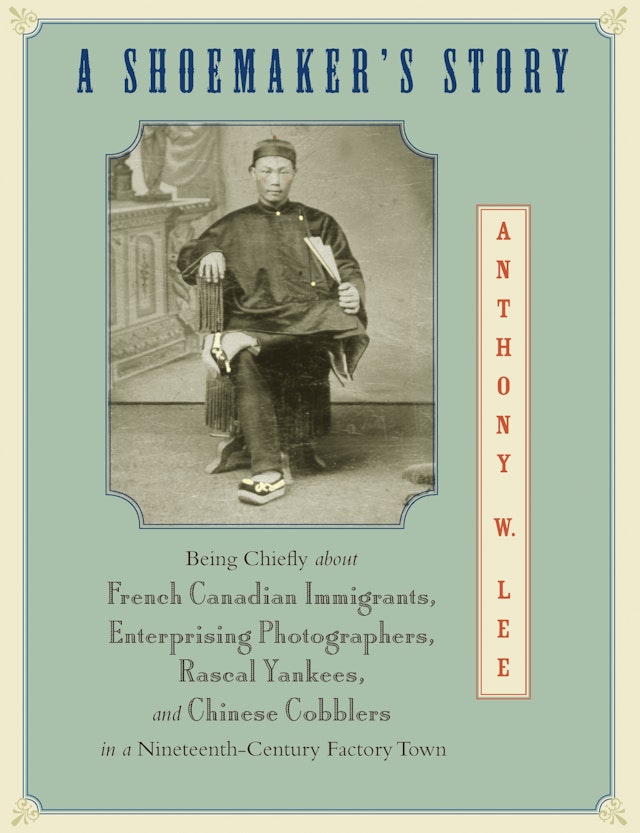 On a June morning in 1870, seventy-five Chinese immigrants stepped off a train in the New England factory town of North Adams, Massachusetts, imported as strikebreakers by the local shoe manufacturer. They threaded their way through a hostile mob and then — remarkably — their new employer lined them up along the south wall of his factory and had them photographed as the mob fell silent. So begins A Shoemaker’s Story. Anthony Lee seeks to understand the social forces that brought this now-famous photograph into being, and the events and images it subsequently spawned. He traces the rise of photography as a profession and the hopes and experiences of immigrants trying to find their place in the years following the Civil War. He describes the industrialization of the once-traditional craft of shoemaking, and the often violent debates about race, labor, class, and citizenship that industrialization caused.


Generously illustrated with many extraordinary photographs, A Shoemaker’s Story brings 1870s America to vivid life. Lee’s spellbinding narrative interweaves the perspectives of people from very different walks of life — the wealthy factory owner who dared to bring the strikebreakers to New England, the Chinese workers, the local shoemakers’ union that did not want them there, the photographers themselves, and the ordinary men and women who viewed and interpreted their images. Combining painstaking research with world-class storytelling, Lee illuminates an important episode in the social history of the United States, and reveals the extent to which photographs can be sites of intense historical struggle.

"Generously illustrated with many extraordinary photographs, A Shoemaker's Story brings 1870s America to vivid life. Combining painstaking research with world-class storytelling, Lee illuminates an important episode in the social history of the United States, and reveals the extent to which photographs can be sites of intense historical struggle."—Spartacus Educational

"Although some historians might be put off by Lee's narrative style, it is a useful and informative method to access the complexity of American industrialization and especially to bring the voices of those who are often silent in the past to the forefront. Furthermore, for historians who are looking for model scholarship that uses photographs as more than illustrations, this book is a welcome and much-needed resource."—Krystyn R. Moon, American Historical Review

"The rewards are everywhere present in Lee's research—and the pleasure of his writing. As a historian, Lee combines the local detail with the large issues, all the while turning elegant phrases and marshalling his account into a page-turning story that asserts, after all, 'what the author saw.'"—Ellen Wiley Tod, College Art Association

"Innovative and ambitious, A Shoemaker's Story is a lucid and detailed account that is sophisticated in its methodology. Given the wide-ranging subject matter, Lee has produced a remarkably disciplined text, presenting the reader with a distinctive narrative tone that is mature, confident, and occasionally playful."—James Opp, Labour-Le Travail

"Lee's lively and accessible account of their story is a must read for students and scholars of immigration and labor history."—Evelyn Sterne, Journal of American Ethnic History

"A Shoemaker's Story will justifiably find a place in the historiography of photography, immigration, the visual culture of diaspora, and nineteenth-century industrialization. It is a model of research design, engaging narrative prose, and close attention to the specificity of form. . . . Telling a new story in old-fashioned ways, [Lee] has crafted an exquisite piece of scholarship whose very title suggests the traditional detective work essential to both good history and compelling prose."—Elspeth H. Brown, CAA Reviews

"A Shoemaker's Story gives us a history of these events, offering an instructive and vividly written case study into the development of industry and unions, the deskilling of labor, the growth of immigration, and the transformation of identities that characterized post Civil War America."—Mike Rabourn, Historical Journal of Massachusetts

"A Shoemaker's Story is a brilliant book that fully conveys the richness of historical meaning common photographs can bring to light in the hands of a skillful interpreter. Anthony Lee's tale of multiple encounters among Yankee townspeople and factory owners, Chinese and French Canadian migrant laborers, and itinerant and studio photographers in North Adams, Massachusetts, is full of insight into the confluence of United States labor history, ethnic studies, and visual culture. Beautifully written as well, it will be required, desired, and inspired reading for anyone's list."—Laura Wexler, Yale University

"Combining extraordinary archival work, an acute eye for the visual and social logic of photographs, and knowledge of the experiential history of their subjects, Anthony Lee offers a riveting account of the complex uses of nineteenth-century photography. In his readings, the power of images becomes a matter of complex cultural transactions and negotiations, as images themselves are viewed as critical objects for histories of labor, economic life, racial community, and self-representation. This groundbreaking study will influence scholarship for a considerable time to come."—Sara Blair, author of Harlem Crossroads

"This book is a pleasure. Lee weaves together the many stories that run through these extraordinary photographs with exemplary deftness. Having dug deep in the archives, he cogently reconstructs the social dynamics of a forgotten community and a fascinating historical moment. His vivid tale should appeal to scholars and general readers alike."—Robin Kelsey, Harvard University

"Wonderfully innovative and original. Anthony Lee offers a fascinating story that weaves together the history of manufacturing, labor, immigration, and photography. The photograph here becomes a new kind of historical evidence to be mined and untangled, a constellation of competing forces and desires. Beautifully written in remarkably lucid, playful prose. A real pleasure to read."—Shawn Michelle Smith, School of the Art Institute of Chicago

"Through his reading of a single photograph taken of Chinese strikebreakers acquired to work in a shoe factory, Lee leads us on a fascinating exploration of the historical circumstances and social relations that gave rise to that photograph. The book shows an exemplary ambition in its methodological attempts to bring together close reading of visual texts, historical analysis, and archival research. An unflaggingly pleasurable read."—Gary Y. Okihiro, Columbia University