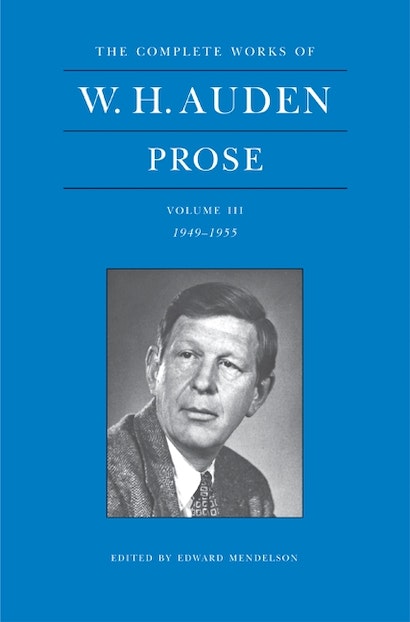 This volume contains all of W. H. Auden’s prose works from 1949 through 1955, including many little-known essays that exemplify his range, wit, depth, and wisdom. The book includes the complete text of Auden’s first separately published prose book, The Enchafèd Flood, or, The Romantic Iconography of the Sea, followed by more than one hundred separate essays, reviews, introductions, and lectures, as well as a questionnaire (complete with his own answers) about the reader’s fantasy version of Eden. Two reviews that Auden wrote for the New Yorker, but which the magazine never printed, appear here for the first time, and a series of aphorisms previously published only in a French translation are printed in English. Among the previously unpublished lectures is a long account of the composition of his poem “Prime,” complete with his comments on early rejected drafts.


The variety of style and subject in this book is almost inexhaustible. Auden writes about the imaginary mirrors that everyone carries through life; French existentialism and New Yorker cartoons; Freud, Kierkegaard, Dostoyevsky, and Camus; Keats, Cervantes, Melville, Colette, Byron, Virgil, Yeats, Tolkien, and Virginia Woolf; opera, ballet, cinema, prosody, and music; English and American poetry and society; and politics and religion.


The introduction by Edward Mendelson places the essays in biographical and historical context, and the extensive textual notes explain obscure contemporary references and provide an often-amusing history of Auden’s work as an editor of anthologies and a series of books by younger poets.

Edward Mendelson is the literary executor of the Estate of W. H. Auden and the Lionel Trilling Professor in the Humanities at Columbia University. His books include Early Auden, Later Auden, and The Things That Matter.

"Prose, Volume III is wonderfully edited, like all the many editions of Auden supervised by Edward Mendelson. . . . Most of the articles will delight any reader with their wit. charm, and elegance."—Charles Rosen, The New York Review of Books

"This latest installment of Edward Mendelson's edition of the Complete Works contains Auden's prose writings from a mere six years, roughly the poet's forties. It was preceded by two large volumes covering 1926 to 1938 and 1939 to 1948. The three total more than two thousand pages and there will have to be at least one more volume, covering the period between 1955 and Auden's death in 1973. When you add in the volumes already devoted to plays, libretti, poems, it becomes hard to avoid describing the whole enterprise as heroic. In fact it could also be described as unique, for no other 20th-century English poet has been so fully and patiently honoured."—Frank Kermode, London Review of Books

"This third volume of his complete prose is the best yet...Here is the ambitious set of lectures published as The Enchafèd Flood, about the Romantic hero and the sea, in Melville, Baudelaire and (taken with entire seriousness) Edward Lear. Here are the influential reviews of Tolkien and the introductions to first books by Adrienne Rich and John Ashbery.... No major writer's complete works are more fun to read."—Publishers Weekly

"Few great and greatly prolific poets wrote as much irresistible and glorious prose as W.H. Auden but he was, by any assay, one of the greatest essayists and critics of the 20th century. And here we have Auden in his 40s, one of the greatest eras of Auden prose, the era of The Enchaféd Flood, and so many of the essays collected in The Dyer's Hand."—Jeff Simon, Buffalo News

"With the fifth volume of his 'Complete Works' and the third of his prose out—with a fourth, and final volume promised—we can glimpse almost the full range of [Auden's] interests and his remarkable versatility...When Auden felt affinity with a subject, his prose could dazzle. His essay here on Oscar Wilde, 'A Playboy of the Western World: St. Oscar, the Hominterm Martyr,' is at once poignant and astute, as is his fine introduction to a selection of Edgar Allan Poe's writings. But the best essay may be 'Portrait of a Whig,' Auden's searching and affectionate study of the inimitable Sydney Smith (1771­1845)."—Eric Ormsby, New York Sun

"In part the appeal of this volume derives from its author's aphoristic cast of mind, but more significant is the self-evident fact Auden was a poet first and a critic second: for all his love of lists and categories, his thought is always round, never linear. He is able to see, as only a poet can, that rules don't always apply, that they can sometimes be broken."—Oliver Dennis, The Australian

"Praise for previous volumes: "To have found and contextualized the material collected in this second volume of Auden's prose is a magnificent achievement, and Edward Mendelson's immaculately handled edition will be a scholarly resource of a permanent kind.""—Peter MacDonald, Times Literary Supplement

"Praise for previous volumes: "This essential volume in a projected complete edition restores the voracious reader and never pedantic critic to the master poet.""—Publisher's Weekly

"Praise for previous volumes: "The Complete Works, edited with elegant scruple by Auden's literary executor Edward Mendelson is . . . the only way to get at Auden as he happened, year by year, bit by bit, and not as he, or his later biographers, want us to think of him.""—Tom D'Evelyn, Boston Book Review

"Praise for previous volumes: "The collection, which can be dipped into as well as read as a whole, is a feast of language and insight.""—Arthur Kirsch, Washington Post Book World

"Mendelson's introductions to each of the five installments so far of Auden's Complete Works have been unfailingly elegant and magisterial."—Alan Jacobs, Books & Culture

"This scholarly collection, with its seventy pages of notes on variant readings, revives many interesting pieces as well as numerous others of interest mainly to academics."—Larry Koenigsberg, Magill Book Reviews

"This excellent tomb of a book is as academic as it is entertaining as it is informative as it is inspiring as it is (obviously) superbly well written. The only downside being, it ensures the literary bar is so highly placed, it ensures the rest of us can only ever negotiate coming close—if, with the exception of a selected few, such a thing is remotely possible."—David Marx, bookreviews.davidmarx.co.uk