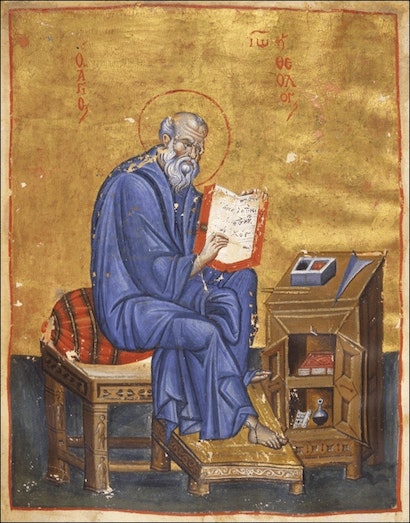 This is the first comprehensive scholarly publication of the rich holdings of Greek manuscripts and miniatures in Princeton, New Jersey, housed in the Firestone Library and the art museum of Princeton University, in the Scheide Library, and in Princeton Theological Seminary.

This important material represents both a broad range of time — from the early Byzantine period through the mid-nineteenth century — and a broad range of content, from Byzantine copies of classical texts to Gospel books, Lectionaries and patristic homilies, hymns and texts of the liturgy, medical books, and Holy Land pilgrimage guides.

Among the manuscripts are some spectacularly illustrated works, key monuments in the history of Byzantine illumination: an eleventh-century codex of John Klimax’s Heavenly Ladder with vivid and unusual depictions of monastic life; evangelist portraits from a number of artistic periods and centers; extraordinary pages of pure ornament; and fine examples of post-Byzantine liturgical illustration of the sixteenth and seventeenth centuries. Among the most significant texts are a sixth-century palimpsest with Greek hymns in an extremely early form of musical notation, and a thirteenth-century copy of Aristotle’s Organon, heavily annotated by the renowned Byzantine scholar and teacher John Chortasmenos (ca. 1370-1430). The collection also includes a fascinating eighteenth-century genealogical chronicle — a 45-foot-long roll with 562 illustrations of biblical events and personalities from the Creation to the Ascension of Christ, a work that was probably produced in the area of present-day Romania.

This collection offers insight into many aspects of the artistic and intellectual life — theological, monastic, scholarly, ecclesiastical — of the Byzantine and post-Byzantine world. It also contributes to the history of Greek philology and the development of the Greek book over more than a millennium, from the earliest centuries of manuscript production down to the period when, long after the appearance of printing, liturgical texts continued to be copied by hand and lavishly illuminated.

The catalogue provides codicological and art-historical analysis of all 64 manuscripts and leaves, along with detailed information on their content, provenance, and bindings; extensive bibliographies; and ample plates, almost all of them in color.

Sofia Kotzabassi is professor in the Department of Medieval and Modern Greek Studies at Aristotle University of Thessaloniki. A specialist in Byzantine philology, her publications include works on the Byzantine commentators on Aristotle. Her book Byzantine Manuscripts from the Monasteries of Asia Minor (in Greek) (Athens: Ephesus) was named the best publication of 2004 on Byzantine philology by the Academy of Athens. She serves on the editorial board of the Jahrbuch der Österreichischen Byzantinistik. Nancy Patterson Ševčenko,, an independent scholar, has published on a wide variety of topics in Byzantine art, liturgy, and culture, including Cycles of the Life of Saint Nicholas in Byzantine Art (Turin: Bottega d'Erasmo) and Illustrated Manuscripts of the Metaphrastian Menologion (Chicago). Associate editor of The Oxford Dictionary of Byzantium, she also coedited Medieval Cyprus: Studies in Art, Architecture, and History in Memory of Doula Mouriki (Princeton). She is currently an honorary vice president of the Association Internationale des Études Byzantines. Don C. Skemer has been curator of manuscripts in the Department of Rare Books and Special Collections at Princeton University Library since 1991. He is the author of Binding Words: Textual Amulets in the Middle Ages (Pennsylvania State University Press). His research interests are the history of the medieval book and magic, and he is currently completing a comprehensive catalogue of the Western medieval and Renaissance manuscripts in the Princeton University Library.

"This extraordinarily handsome volume presents in detail 63 Greek manuscripts and fragments to be found at Princeton University (including the University Library, the Scheide collection and the University Art Museum) and one volume at the Theological Seminary. It is a substantial volume, for its appealing presentation, its heft and its rigorous presentation. By current standards, this is a luxury production, and it shows just cause for Princeton's longstanding reputation in Hellenic studies and its strengths in publishing its endeavors in this field."—Glenn Peers, Medieval Review

"Here is a generously presented large quarto volume, handsomely designed, and printed and bound on acid-free paper, to ensure that it will last physically as long as its scholarly content, and be enjoyed and appreciated for just as long; and that will be for many years indeed. This is a book of great value for academic studies of mediaeval Greek, for studies of Biblical and other religious texts, or for the history of the book."—Stuart James, Reference Reviews

"Greek Manuscripts at Princeton is . . . such a model of this genre that it should find a place in all serious university libraries and a home with manuscript scholars of all stripes and Byzantinists across the subspecialties of the discipline."—Leslie Brubaker, Speculum