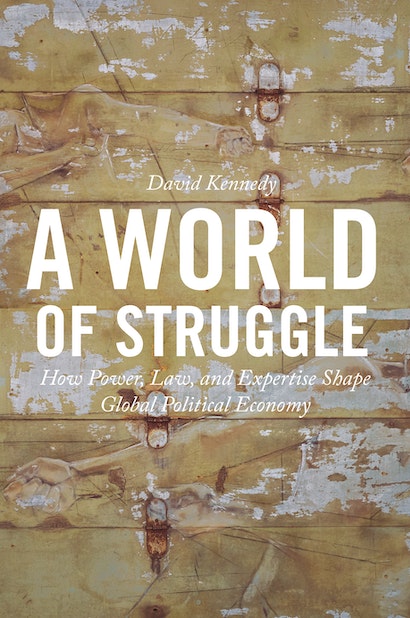 A World of Struggle reveals the role of expert knowledge in our political and economic life. As politicians, citizens, and experts engage one another on a technocratic terrain of irresolvable argument and uncertain knowledge, a world of astonishing inequality and injustice is born.

In this provocative book, David Kennedy draws on his experience working with international lawyers, human rights advocates, policy professionals, economic development specialists, military lawyers, and humanitarian strategists to provide a unique insider’s perspective on the complexities of global governance. He describes the conflicts, unexamined assumptions, and assertions of power and entitlement that lie at the center of expert rule. Kennedy explores the history of intellectual innovation by which experts developed a sophisticated legal vocabulary for global management strangely detached from its distributive consequences. At the center of expert rule is struggle: myriad everyday disputes in which expertise drifts free of its moorings in analytic rigor and observable fact. He proposes tools to model and contest expert work and concludes with an in-depth examination of modern law in warfare as an example of sophisticated expertise in action.

Charting a major new direction in global governance at a moment when the international order is ready for change, this critically important book explains how we can harness expert knowledge to remake an unjust world.

David Kennedy is the Manley O. Hudson Professor of Law and Director of the Institute for Global Law and Policy at Harvard Law School. He is the author of The Rights of Spring: A Memoir of Innocence Abroad; Of War and Law; and The Dark Sides of Virtue: Reassessing International Humanitarianism, and the editor of The Canon of American Legal Thought (with William Fisher) (all Princeton).

"David Kennedy's A World of Struggle describes our world more accurately than any book I have read this year. Kennedy offers no clear prescriptions. Yet he clarifies that understanding how this world of injustice and inequality came about is the essential first step toward a democratic alternative."—Pankaj Mishra, New York Times Book Review

"In his new book on how the world is ruled today through expert knowledge, Professor David Kennedy enters this continuing discussion in brilliant, pathbreaking, and trademark fashion. . . . Presented without theoretical encumbrance or jargon, A World of Struggle is a straightforward but sophisticated account that capitalizes on prior insight to achieve a unique and powerful vantage point. The superlative book wins its distinction not only because it constructs a novel theory but also because it applies that theory to how the globe as a whole is ruled—something no one in the canon of social theory has really done."—Samuel Moyn, Harvard Law Review

"Accounts of global politics are usually organized around time periods of settled order, during which powerful states laid down rules and established institutions. In this illuminating study, Kennedy tells a different story, in which contemporary international relations play out as a continuous struggle between technocratic elites around the world, in which nothing is ever settled and everything is negotiable."—G. John Ikenberry, Foreign Affairs

"A profound and arresting account of how globalization is constructed by experts who obfuscate their own role. . . . It is surely worth reading to understand yesterday's world—and very likely tomorrow’s as well."—Tom Ginsburg, American Journal of International Law

"A World of Struggle seeks to pull back the veil on the workings of expertise, offering a rich description of the expert knowledge practices that shape our world. . . . The originality of Kennedy's argument can hardly be overstated. . . . A rich and varied body of work."—Tor Krever, New Left Review

"Given the tendency of hidden background decisions and dominant scripts to reproduce inequality and injustice, what role should expertise play? World of Struggle argues less for abandonment than reimagination. In this work, Kennedy continues his long-term project of uncovering the hidden implications of multiple mundane “expert” decisions that shape a paradoxical world: one both unstable and unshakable. Here, finally, is the foundational ambition of World of Struggle and its challenge to readers: to undo the hegemony of common sense, to unlearn the boundaries of reason, to unsettle what has seemingly been seamlessly resolved, to untell the familiar stories of binaries and boundaries, to uncover the struggles that expertise obscures, and thus to unleash the possibility of remaking the world."—Zinaida Miller, Journal of Legal Education

"A World of Struggle offers a dramatically new and important analysis of the logics, techniques, and sites of global rule. In it, Kennedy draws attention to the significance of expert work in the global exercise of power, shedding new light on the background processes by which the world is interpreted for ‘decision makers,' and by which those decisions are then interpreted in and for the world. Written with subtlety and startling insight, this book will take its place in the canon of essential reading for those interested in the nature of contemporary global governance."—Andrew Lang, London School of Economics

"To change the world, you must understand how it is put together. Kennedy's powerful analysis reveals how inequality and injustice become entrenched and what might be done in response. A must-read for people of good heart who inhabit the professions of law and policy. Our technocratic world can be remade: Kennedy helps us see how—and where to begin."—José Ramos-Horta, former president of East Timor and recipient of the Nobel Peace Prize

"David Kennedy, one of our most cerebral and critical thinkers, here challenges the tyranny of ‘experts,' whose strident cacophony of claims all too often passes for the apex of policy debate. Drawing on history, law, and economics, and highlighting the new salience of regulation as a principal vector of policymaking, he charts a highly original path and calls for profound change in how we conceive of international society."—David Malone, rector of the United Nations University

"A World of Struggle, David Kennedy's brilliant study of global governance, takes the reader on a tour de force through every modality driving international legal norms today. As the global system struggles with enormous international change, this book will be regarded as a powerful touchstone of innovation and intellectual reflection that helps us coherently remake the world."—Admiral James Stavridis, dean of the Fletcher School of Law and Diplomacy, Tufts University, former supreme allied commander at NATO

"Kennedy believes we are at a crucial moment in world making and urgently need to transcend the limits of global expertise. This important book opens up a whole new way of thinking about how the world is—or is not—governed."—David M. Trubek, University of Wisconsin–Madison

"Absolutely original and brilliant. In A World of Struggle, Kennedy uses critical legal technique to produce a sharp, fully convincing analysis of the dysfunction of an international system ruled by experts in constant struggle with each other."—Martti Koskenniemi, author of From Apology to Utopia: The Structure of International Legal Argument