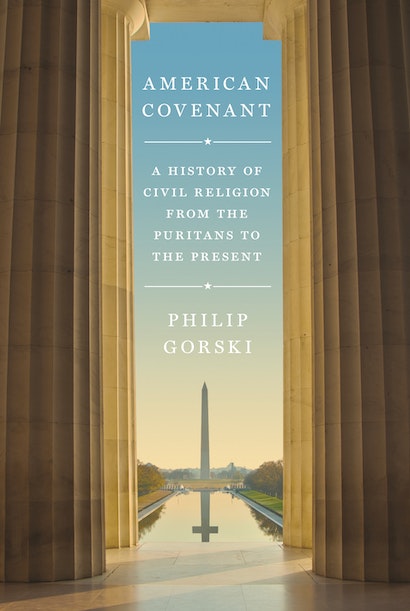 Was the United States founded as a Christian nation or a secular democracy? Neither, argues Philip Gorski in American Covenant. What the founders actually envisioned was a prophetic republic that would weave together the ethical vision of the Hebrew prophets and the Western political heritage of civic republicanism. In this ambitious book, Gorski shows why this civil religious tradition is now in peril—and with it the American experiment.

Gorski traces the historical development of prophetic republicanism from the Puritan era to the present day. He provides close readings of thinkers such as John Winthrop, Thomas Jefferson, Frederick Douglass, W.E.B. Du Bois, and Hannah Arendt, along with insightful portraits of recent and contemporary religious and political leaders such as Jerry Falwell, Pat Robertson, Ronald Reagan, George W. Bush, and Barack Obama. Gorski shows how the founders’ original vision for America is threatened by an internecine struggle between two rival traditions, religious nationalism and radical secularism. Religious nationalism is a form of militaristic hyperpatriotism that imagines the United States as a divine instrument in the final showdown between good and evil. Radical secularists fervently deny the positive contributions of the Judeo-Christian tradition to the American project and seek to remove all traces of religious expression from the public square. Gorski offers an unsparing critique of both, demonstrating how half a century of culture war has drowned out the quieter voices of the vital center.

American Covenant makes the compelling case that if we are to rebuild that vital center, we must recover the civil religious tradition on which the republic was founded.

"[A] sweeping and exhilarating review of the history of American political culture. . . . More academics should follow [Gorski's] example of contributing to public debate in an accessible way."—Publishers Weekly

"[American Covenant] charts one way to political reconciliation in these divisive times. . . . [T]his is an important work, one that returns us to our national origins, examines the evidence about our founding—and our founders—concerning religion and its interactions with public policy."—Kirkus

"A rich, detailed account of the history of efforts to define American religion."—Sarah Posner, American Prospect

"Writing as both a citizen and a scholar, Gorski wraps his passionate appeal for the common good in a thoroughly documented and convincing argument. A remarkable achievement."—Choice

"This book is indispensable reading for lay readers and specialists alike, but it will be of particular interest to graduate students and scholars of American religion, political scientists, and critics of presidential rhetoric. It is highly recommended."—Michael R. Whitenton, Reading Religion

"Gorski has offered a work that deserves dialogue and consideration, and such dialogue, across the political divides, is vital in our current moment."—Jonathan J. Den Hartog, Journal of Church and State

"Gorski deserves commendation for stirring up a serious and needed discussion concerning the direction in which we should seek to move our country."—John M. Pafford, Anglican and Episcopal History

"Much has been written about how deeply divided we Americans are. Philip Gorski's American Covenant is an enormously thoughtful, innovative, and helpful book aimed at reopening conversation across our religious, cultural, and political divides. Even readers who disagree with him and with where he locates a new ‘vital center' will profit from his deep understanding of American history and his brave effort to find a way for us to step aside from what so often feels like an eternal culture war."—E. J. Dionne Jr., author of Souled Out and Why the Right Went Wrong

"Philip Gorski's stimulating and original history of civil religion restarts a conversation begun by Robert Bellah at the height of the American involvement in Vietnam. It is a vital conversation again in the contemporary United States and Gorski offers a compelling vision of a patriotism that steers between a belligerent nationalism and a dismissal of all religious contributions. It's a learned and even necessary book."—John T. McGreevy, author of American Jesuits and the World

"Philip Gorski practices sociology in the grand tradition. American Covenant will be read and debated for decades to come. And it comes at just the right moment."—Alan Wolfe, Boston College

"This engaging and ambitious book offers a sobering analysis that at the same time suggests hope for moving past the malignant divisiveness with which our nation is currently afflicted."—Robert Wuthnow, author of In the Blood: Understanding America's Farm Families

"Gorski provides a deep intellectual backdrop to the political mess we find ourselves in today."—John Durham Peters, author of The Marvelous Clouds: Toward a Philosophy of Elemental Media