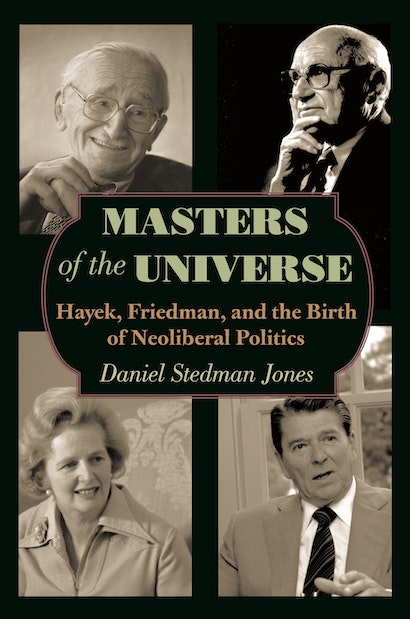 How did American and British policymakers become so enamored with free markets, deregulation, and limited government? This book—the first comprehensive transatlantic history of the rise of neoliberal politics—presents a surprising answer. Based on archival research and interviews with leading participants in the movement, Masters of the Universe traces the ascendancy of neoliberalism from the academy of interwar Europe to supremacy under Reagan and Thatcher and in the decades since. Daniel Stedman Jones argues that there was nothing inevitable about the victory of free-market politics. Far from being the story of the simple triumph of right-wing ideas, the neoliberal breakthrough was contingent on the economic crises of the 1970s and the acceptance of the need for new policies by the political left.

Masters of the Universe describes neoliberalism’s road to power, beginning in interwar Europe but shifting its center of gravity after 1945 to the United States, especially to Chicago and Virginia, where it acquired a simple clarity that was developed into an uncompromising political message. Neoliberalism was communicated through a transatlantic network of think tanks, businessmen, politicians, and journalists that was held together by Friedrich Hayek and Milton Friedman. After the collapse of Bretton Woods in 1971, and the “stagflation” that followed, their ideas finally began to take hold as Keynesianism appeared to self-destruct. Later, after the elections of Reagan and Thatcher, a guileless faith in free markets came to dominate politics.

Fascinating, important, and timely, this is a book for anyone who wants to understand the history behind the Anglo-American love affair with the free market, as well as the origins of the current economic crisis.

"In impressive fashion, Jones analyzes the impact of free market economics and deregulation on political leaders in Washington, D.C., and London since the 1970s. . . . [A]nyone intrigued by the intersection of economic theory and political affairs will appreciate this learned, detailed book."—Publishers Weekly

"A cerebral, pertinent exegesis on the thinking behind the rise of the New Right. . . . [A] valuable study that helps flesh out the caricature of conservatives as only believing 'greed is good.'"—Kirkus Reviews

"Stedman Jones . . . describes the scene with remarkable accuracy, including its financial underpinning and its ties with conservatism."—Karen Horn, Standpoint

"Mr. Stedman Jones offers a novel and comprehensive history of neoliberalism. It is tarred neither by a reverence for the heroes, nor by caricature, for he is a fair and nuanced writer. This is a bold biography of a great idea."—Economist

"[A] lucid, richly detailed examination of the evolution of the free market ideology since the end of World War II."—Glenn C. Altschuler, Pittsburgh Post-Gazette

"Masters of the Universe is a firm brief for the independent, causal power of ideas to shape history. . . . [It] does much to help explain the aftermath of 2008 and the ways in which political responses that might have defined another era seem unthinkable in ours."—Jennifer Burns, American Prospect

"His lengthy exposition of the views shared by these outstanding economists might encourage many to pay attention to their works."—Alejandro Chafuen, Forbes

"This is a timely history of the Anglo-American love affair with the market and the origins of the current economic crisis."—Keith Richmond, Tribune

"[T]his is an insightful, substantive historical account of the Anglo-American political economy underpinning the conservative economic agendas of the Thatcher and Reagan administrations."—Choice

"Jones gives us the best kind of intellectual history, showing the interplay of ideas, ideology and nascent political movements. The book should be lauded for illustrating that the history of ideas is not straightforward, and a big idea can be bent towards something that its originators might not have imagined."—Joel Campbell, International Affairs

"[T]his ambitious book is one of the very best histories we have of the development of neoliberal ideas and ideology before the era of Thatcher and Reagan."—W. Elliot Brownlee, Journal of American History

"Daniel Stedman Jones has an unusual talent—making the history of economic thought fascinating and significant. In tracing the evolution of neoliberal ideas and their implementation in public policy in Britain and the United States, he does a superb job of helping us understand both the last half-century of Atlantic history and the origins of the current crisis. No book could be more timely."—Eric Foner, Columbia University

"Daniel Stedman Jones captures brilliantly the interaction between ideas and events in this compelling history of the rise of Thatcherism and Reaganism. He displays a willingness, unusual in a historian, to treat economic ideas seriously, and not just as weapons in a political struggle. In the light of the economic collapse of 2007-2008, the intellectual debates of the 1970s and 1980s, brought so vividly to life here, are as fresh as they were at the time."—Robert Skidelsky, author of Keynes: Return of the Master

"Daniel Stedman Jones shows how neoliberalism gained ascendancy in both the United States and the United Kingdom. This timely book is a model of calmness, lucidity, and reasoned argument, intent on understanding neoliberalism rather than celebrating or condemning it out of hand."—Sean Wilentz, author of "The Age of Reagan: A History, 1974-2008"