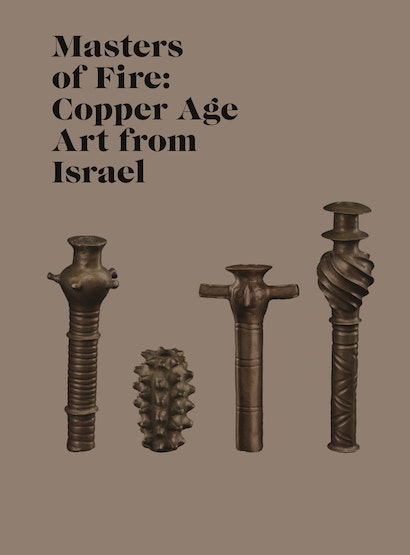 The catalogue for the exciting exhibition at New York University’s Institute for the Study of the Ancient World, Masters of Fire presents a comprehensive overview of the little-known yet extraordinary Chalcolithic culture, which existed in the southern Levant from 4500–3600 bce.

Masters of Fire focuses on the people of the southern Levant who harnessed the power of metallurgy during the fourth millennium bce. Artisans produced extraordinary copper objects while other craftsmen molded pottery and stone into complex anthropomorphic burial containers, statuettes, and ritual objects. Taken together, these artifacts reveal the first stratified culture known in the ancient Near East. Highlights of the exhibition include a selection of material from the Nahal Mishmar hoard, an unprecedented collection of copper prestige and ritual objects, organic materials from the Cave of the Warrior, and an exceptional group of ritual figurines.

Michael Sebbane is chief curator of the National Treasures of the Israel Antiquities Authority. Osnat Misch-Brandl is a curator of Chalcolithic and Canaanite periods at the Israel Museum, Jerusalem. Daniel M. Master is professor of archaeology at Wheaton College and codirector of the Leon Levy Expedition at Ashkelon.

"This well-illustrated book provides an excellent introduction to the Chalcolithic period (4500-3600 BCE) of the southern Levant. . . . Of special interest is the well-illustrated essay detailing the hoard of metal objects recovered from the cave of Nahal Mishmar and the techniques of their manufacture. This hoard consists of crowns and numerous elaborate mace-heads representing some of the earliest artifacts cast in molds by cire perdue processes in the ancient Near East."—Choice