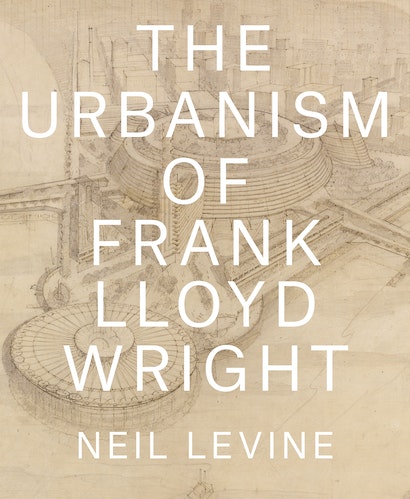 This is the first book devoted to Frank Lloyd Wright’s designs for remaking the modern city. Stunningly comprehensive, The Urbanism of Frank Lloyd Wright presents a radically new interpretation of the architect’s work and offers new and important perspectives on the history of modernism. Neil Levine places Wright’s projects, produced over more than fifty years, within their historical, cultural, and physical contexts, while relating them to the theory and practice of urbanism as it evolved over the twentieth century.

Levine overturns the conventional view of Wright as an architect who deplored the city and whose urban vision was limited to a utopian plan for a network of agrarian communities he called Broadacre City. Rather, Levine reveals Wright’s larger, more varied, interesting, and complex urbanism, demonstrated across the span of his lengthy career. Beginning with Wright’s plans from the late 1890s through the early 1910s for reforming residential urban neighborhoods, mainly in Chicago, and continuing through projects from the 1920s through the 1950s for commercial, mixed-use, civic, and cultural centers for Chicago, Madison, Washington, Pittsburgh, and Baghdad, Levine demonstrates Wright’s place among the leading contributors to the creation of the modern city. Wright’s often spectacular designs are shown to be those of an innovative precursor and creative participant in the world of ideas that shaped the modern metropolis.

Lavishly illustrated with drawings, plans, maps, and photographs, this book features the first extensive new photography of materials from the Frank Lloyd Wright Foundation Archives. The Urbanism of Frank Lloyd Wright will serve as one of the most important books on the architect for years to come.

Neil Levine is the Emmet Blakeney Gleason Research Professor of History of Art and Architecture at Harvard University. His books include The Architecture of Frank Lloyd Wright (Princeton) and Modern Architecture: Representation and Reality.

"In his bracing new book, The Urbanism of Frank Lloyd Wright, Neil Levine affirms the genius appellation, but challenges the anti-urbanist label, examining seven sites of Wright's urban interventions. . . . Some readers of Neil Levine's impressive book may conclude that since only a small portion of Wright's urban designing was actually realized, his work in this realm must be judged a failure. That is not the case; even when Wright's work survives only in words and drawings, they make significant contributions to our understanding of his achievement. This book, moreover, has another important dimension beyond Frank Lloyd Wright's own colossal career. It explores the history of cities and the urban situations that foster—and impede—the progress of architecture and its role in creating a better, healthier and more felicitous environment."—Thomas S. Hines, Times Literary Supplement

"Levine . . . strives valiantly to break Wright's partly vanguard, partly bonkers urban vision free from the tyranny of categorical misreading. This means contextualizing the nadir of Broadacre City within Wright's own musings on city planning, which nearly span the length of his career, beginning with his designs for a suburban compound at Oak Park, Chicago in the 1890s."—Samuel Medina, Metropolis

"An authoritative study. . . . The Urbanism of Frank Lloyd Wright challenges the long-held assumption that Wright was an anti-urbanist, and Levine conveys a clear view of Wright seeking to improve the urban experience."—Gwyn Lloyd Jones, Architecture Today

"Copiously illustrated with plans, maps, and photographs, this book sets forth a monument to one of the most prominent architects of the 20th century. . . . A feast for the eyes and a font of information, this title belongs in all institutions that teach architecture."—Library Journal

"This is a beautifully crafted study of Wright's place in the history of urbanism in the first half of the 20th century. Levine, professor of art and architecture history at Harvard, uses ‘urbanism' to refer not just to cities but to projects for multiple owners, multiple architects, and built over time. He examines Wright's provocative ideas, ranging from a project in downtown Pittsburgh to the semi-rural plan of Broadacre City to a mixed-use scheme for Baghdad. The book, replete with sketches, drawings, plans, maps, and photographs from the Frank Lloyd Wright Foundation, offers encyclopedic detail and density. Levine's exhaustive scholarship should make it required reading for practitioners and urban design students alike."—Craig Whittaker, Architectural Record

"Frank Lloyd Wright made an indelible impression on 20th-century architecture with buildings such a Taliesin, Fallingwater, and New York's Guggenheim Museum. . . . But what about his unrealized plans? Neil Levin's The Urbanism of Frank Lloyd Wright . . . explores some of the architect's most notable designs for cities—all but one of which was never erected. . . . The full color drawings in Levine's book are intriguing renderings of what could have been."—Alina Cohen, Surface

"Neil Levine's latest book offers a new, refreshing perspective on Wright. . . . Levine resolutely maintains the reader's focus on Wright's work and genius by offering detailed and vivid descriptions of the journey underlying each of Wright's projects. . . . The book is a treasure trove for every architect and aspiring architect, urbanist, engineer, infrastructure practitioner and inquisitive mind intrigued by the development of the relatively young field of city planning. . . . This book will serve as essential reading for those seeking to carry forward that mission—improving urban planning through effective design."—Noor Bell, CityCity Magazine

"Levine's scholarship has been distinguished by encyclopedic thoroughness in research and an exquisitely sensitive reading of drawings and designs. Both are on display here. . . . Taken collectively, these studies constitute a coherent body of thought about the city and city planning, and establish Wright as a crucial figure in modern urbanism. . . . The sheer density of the historical research sets a high bar for future scholars; Levine’s ten chapters are in essence ten monographs. And yet despite the prodigious amount of factual material, it is presented briskly and elegantly, and with high literary standards. This is revisionism of the best sort, written not to debunk or discredit, but to scrape away the long accumulated residue of myth and simplification. A scholar who has read this book will not be able to teach Wright in the same way."—Michael Lewis, Art Inquiries

"Neil Levine charts new territory by showing convincingly that far from being an antiurbanist, as many have assumed, Frank Lloyd Wright was instead a leading contributor to twentieth-century urbanism. An original work of superb scholarship, this book significantly expands our knowledge of Wright."—David G. De Long, University of Pennsylvania

"Neil Levine makes a brilliant and original case for urbanism as a lifelong and integral part of Frank Lloyd Wright's genius. Scholarship at its highest level, this book will significantly revise our view of Wright and perhaps twentieth-century urbanism as well."—Robert Fishman, University of Michigan