How the Civil War changed the face of war 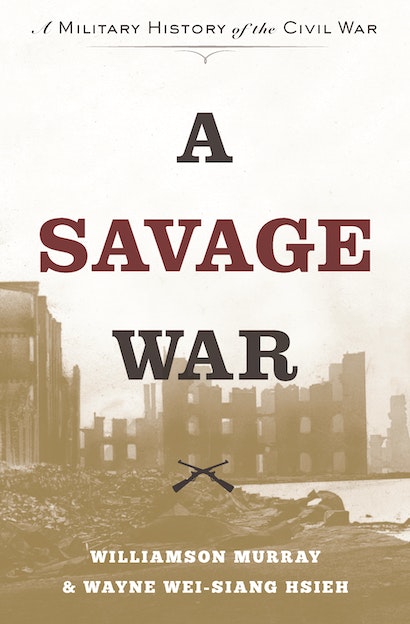 The Civil War represented a momentous change in the character of war. It combined the projection of military might across a continent on a scale never before seen with an unprecedented mass mobilization of peoples. Yet despite the revolutionizing aspects of the Civil War, its leaders faced the same uncertainties and vagaries of chance that have vexed combatants since the days of Thucydides and the Peloponnesian War. A Savage War sheds critical new light on this defining chapter in military history.

In a masterful narrative that propels readers from the first shots fired at Fort Sumter to the surrender of Robert E. Lee’s army at Appomattox, Williamson Murray and Wayne Wei-siang Hsieh bring every aspect of the battlefield vividly to life. They show how this new way of waging war was made possible by the powerful historical forces unleashed by the Industrial Revolution and the French Revolution, yet how the war was far from being simply a story of the triumph of superior machines. Despite the Union’s material superiority, a Union victory remained in doubt for most of the war. Murray and Hsieh paint indelible portraits of Abraham Lincoln, Ulysses S. Grant, William Tecumseh Sherman, and other major figures whose leadership, judgment, and personal character played such decisive roles in the fate of a nation. They also examine how the Army of the Potomac, the Army of Northern Virginia, and the other major armies developed entirely different cultures that influenced the war’s outcome.

A military history of breathtaking sweep and scope, A Savage War reveals how the Civil War ushered in the age of modern warfare.

Williamson Murray is professor emeritus of history at Ohio State University. His many books include The Iran-Iraq War. Wayne Wei-siang Hsieh is associate professor of history at the United States Naval Academy. He is the author of West Pointers and the Civil War. They both live in Fairfax, Virginia.

"[An] outstanding account of the American Civil War. . . . This expertly written narrative will draw in anyone with an interest in the Civil War at any knowledge level."—Library Journal

"A genuinely fresh, persuasive perspective on the Civil War. . . . [A Savage War] will make even readers with a strong knowledge of the war think about how it was fought and why it ended as it did. A winner for Civil War history buffs."—Kirkus

"The best, clearest, and most instructive military history of the Civil War I have ever read. . . . [A Savage War] hit a home run."—Tyler Cowen, Marginal Revolution

"[F]or those who want to understand the key decisions that determined the outcome of the [Civil War], the organization of the opposing armies and their deployments, the role of logistics and intelligence, and the moments of inspired generalship (and missed opportunities), it is hard to imagine a better book than this."—Lawrence D. Freedman, Foreign Affairs

"Murray and Hsieh offer keen insights on the crossroads of social, political, and technological drivers that produced what the authors call the first modern war. . . . The mini-portraits of Abraham Lincoln, Ulysses S. Grant, Robert E. Lee, and William T. Sherman sprinkled throughout that narrative are superb, and the critiques of Jeff Davis and the hapless Henry Halleck are devastating. . . . [A] stimulating contribution to the field that will captivate readers. [A Savage War] belongs on the shelf of students of war, right next to their worn copy of McPherson's classic, Battle Cry of Freedom."—Lt. Col. F.G. Hoffman, Marine Corps Gazette

"Hsieh and Murray illuminate the broader political and cultural forces that shaped the [Civil War's] course while also giving due credit to the impact of contingency and human action.. . . . A Savage War will appeal to both academic and popular audiences with its resonance, accessible prose, and fresh treatment of the events that still captivate America’s public consciousness over 150 years later."—Lt. Andrew L. Hargroder, Civil War Book Review

"A first-rate analysis of command, command structure, and the behavior of officers and men in combat. . . . [Murray's] volume is solidly researched, well written, and deeply interpretive, and it should be read by anyone open to new perspectives on the Civil War."—John M. Belohlavek, Journal of Southern History

"If you think that there is nothing new to write about the Civil War, this book will prove you wrong."—H. R. McMaster, author of Dereliction of Duty: Lyndon Johnson, Robert McNamara, the Joint Chiefs of Staff, and the Lies That Led to Vietnam

"A Savage War is not just a riveting military narrative of the American Civil War written by two military historians with singular pragmatic experience, but a rare and much needed strategic assessment of the aims and methods of the Union and the Confederacy—highlighted with incisive, blunt—and persuasive— appraisals of all the major generals and supreme commanders."—Victor Davis Hanson, author of Carnage and Culture and The Savior Generals

"More than just another narrative of the Civil War, this thoughtful and often provocative book is an engaging analysis of the leadership, personalities, and strategies of both sides during America's great nineteenth-century trauma."—Craig L. Symonds, author of Lincoln and His Admirals

"A Savage War offers a splendid overview of the greatest military trauma in United States history. The authors explore Union and Confederate martial culture, navigate with a sure step through campaigns and battles, and assess leaders convincingly—all the while challenging hoary misconceptions about the conflict. Readers new to the topic, as well as more veteran students, will turn to this book with profit."—Gary W. Gallagher, author of The Union War

"A Savage War is a marvelous book. Iconoclastic, endlessly fascinating, and wide-ranging, this work is a singular achievement, something sure to delight Civil War buffs. A must-read."—Jay Winik, author of 1944 and April 1865

"Murray and Hsieh bring verve, insight, and originality to their account of the Civil War. In a crowded field, A Savage War still stands out as a book of required reading even for specialists."—Allan R. Millett, author of The War for Korea, 1950-1951: They Came from the North

"A genuinely fresh set of insights about the Civil War. Murray and Hsieh have crafted a military narrative that goes well beyond anything else in the literature."—James McPherson, Pulitzer Prize–winning author of Battle Cry of Freedom: The Civil War Era

"Forceful and convincing. Murray and Hsieh have succeeded in producing a very accessible book about a very complex series of events . . . A model of how to write military history."—John Gooch, author of Mussolini and His Generals: The Armed Forces and Fascist Foreign Policy, 1922–1940