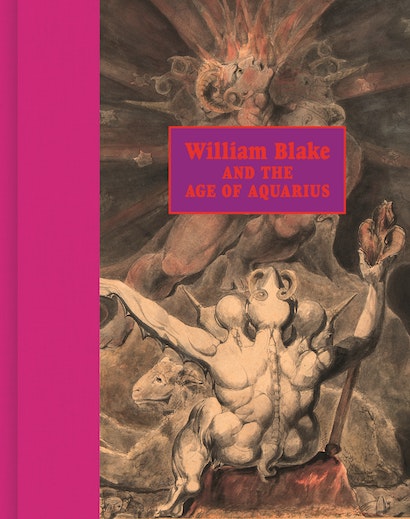 In his own lifetime, William Blake (1757–1827) was a relatively unknown nonconventional artist with a strong political bent. William Blake and the Age of Aquarius is a beautifully illustrated look at how, some two hundred years after his birth, the antiestablishment values embodied in Blake’s art and poetry became a model for artists of the American counterculture.

This book provides new insights into the politics and protests of Blake’s own lifetime, and the generation of artists who revived and reimagined his work in the mid-1940s through 1970, or what might be called the “long sixties.” Contributors explore Blake’s outsider status in Georgian England and how his individualistic vision spoke to members of the Beat Generation, hippies, radical poets and writers, and other voices of the counterculture. Among the artists, musicians, and writers who looked to Blake were such diverse figures as Diane Arbus, Jay DeFeo, the Doors, Sam Francis, Allen Ginsberg, Jess, Agnes Martin, Ad Reinhardt, Charles Seliger, Maurice Sendak, Robert Smithson, Clyfford Still, and many others. This book also explores visual cultures around such galvanizing moments of the 1960s as Woodstock and the Summer of Love.

William Blake and the Age of Aquarius shows how Blake’s myths, visions, and radicalism found new life among American artists who valued individualism and creativity, explored expanded consciousness, and celebrated youth, peace, and the power of love in a turbulent age.

"In 1948, in a Spanish Harlem apartment, the Beat poet Allen Ginsberg had an auditory hallucination of Blake reciting 'Ah Sun-flower!' and other mind-altering verses. That vision changed Ginsberg’s life, and Blake became a touchstone figure for many radical American artists of the 1950s and his destroy-all-tyrants radar continued to burn through the 1960s. It would certainly find appropriate targets today, as is confirmed by this excellent book, the catalog for an exhibition at the Block Museum of Art, Northwestern University."—Holland Cotter, New York Times

"The works of William Blake gradually but conclusively made its way into the poetry of Allen Ginsberg, the principles of Jim Morrison and The Doors, incantations from Van Morrison, and the religious work of Bob Dylan. Indeed, Blake has been everywhere and nowhere at the same time, perhaps just as he would have wanted it to be. William Blake and the Age of Aquarius—a beautiful volume published in conjunction with Northwestern University's Block Museum of Art exhibition of the same name—wonderfully, strikingly, fantastically puts this formidable artist/ poet/ visionary into a logical context. . . . Those familiar with William Blake's work will welcome the considerations of his legacy as seen through visual and auditory art since the mid-20th century through today. Those unfamiliar with Blake should still be fascinated by how the man's work has drifted through the ages without losing much of its power. No reader of this book will come away from it unmoved and indifferent to the potential of the artistic sensibility as it comes to terms with light, dark, and everything in between."—Christopher John Stephens, PopMatters

"William Blake and the Age of Aquarius is the most intriguing book on Blake since Marsha Keith Schuchard’s expose of him as a swinger."—Dominic Green, The Spectator

"One of the most stunning books of art I have ever seen and read. I highly suggest this book to everyone."—Anna Maria Polidori, Al Femminile

"A timely book that provides fresh perspective on the art of the 1960s. Much as it did for the artists and activists of the Beat and hippie generations, Blake's visionary antiestablishment thought and work can perhaps again offer a reference point for those today who are struggling to produce an artistic response appropriate to the new century's demands."—Michael Archer, author of Art Since 1960

"This is a jewel of a book. It revisits the searing and soaring works of Blake through their reincarnation in the 1960s counterculture, deepening the understanding of both."—Daniel Herwitz, author of The Star as Icon: Celebrity in the Age of Mass Consumption