From the New York Times bestselling author of Nudge and The World According to Star Wars, a revealing account of how today's Internet threatens democracy—and what can be done about it 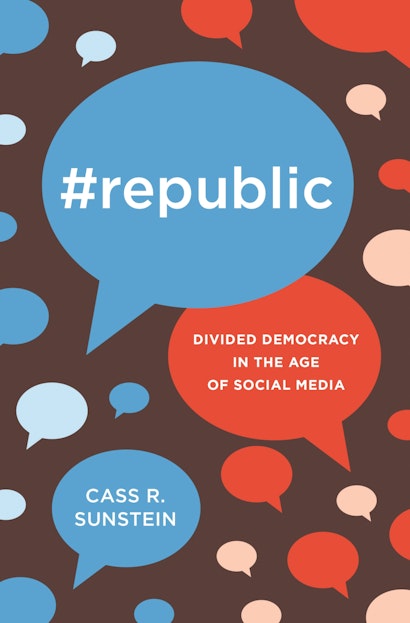 As the Internet grows more sophisticated, it is creating new threats to democracy. Social media companies such as Facebook can sort us ever more efficiently into groups of the like-minded, creating echo chambers that amplify our views. It’s no accident that on some occasions, people of different political views cannot even understand each other. It’s also no surprise that terrorist groups have been able to exploit social media to deadly effect.

Welcome to the age of #Republic.

In this revealing book, Cass Sunstein, the New York Times bestselling author of Nudge and The World According to Star Wars, shows how today’s Internet is driving political fragmentation, polarization, and even extremism—and what can be done about it.

Thoroughly rethinking the critical relationship between democracy and the Internet, Sunstein describes how the online world creates “cybercascades,” exploits “confirmation bias,” and assists “polarization entrepreneurs.” And he explains why online fragmentation endangers the shared conversations, experiences, and understandings that are the lifeblood of democracy.

In response, Sunstein proposes practical and legal changes to make the Internet friendlier to democratic deliberation. These changes would get us out of our information cocoons by increasing the frequency of unchosen, unplanned encounters and exposing us to people, places, things, and ideas that we would never have picked for our Twitter feed.

#Republic need not be an ironic term. As Sunstein shows, it can be a rallying cry for the kind of democracy that citizens of diverse societies most need.

Cass R. Sunstein is the Robert Walmsley University Professor at Harvard Law School. His many books include the New York Times bestsellers Nudge: Improving Decisions about Health, Wealth, and Happiness (with Richard H. Thaler) and The World According to Star Wars.

"I … found myself shocked at how relevant Sunstein's account was to my own life and the ways I seek out and encounter information, which is in a way the value of the book—it gets you to reflect on the role of your information habits on your view of the world around you. And if you want to know how important that is, well, you should read Sunstein's book."—Annie Coreno, Publishers Weekly

"Sunstein argues convincingly that for deliberative democracy to work, citizens must be in a position to consider a range of options."—Angelia R. Wilson, Times Higher Education

"Required reading for anyone who is concerned with the future of democracy."—The Economist

"Ripped straight from the headlines, but informed by hard data,#Republicshould command the attention of American citizens across the political spectrum."—Glenn C. Altschuler, Philadelphia Inquirer

"An excellent assessment of how social psychology, technology, and politics are colliding to produce the extreme and polarized discourse that has come to dominate our contemporary political environment. Its accessible prose and clear organization make it a solid pick for political science courses as well as citizens who want to better understand how technology is changing the way we think and talk about politics in today's world."—Alex Dean, Prospect

"#Republic . . . describes how social media shapes politics and journalism. So far, it has not received as much attention as Nudge. This is a pity: the ideas in #Republic are arguably more important—and more pressing."—Gilliant Tett, Financial Times Magazine

"Recent events such as the unexpected rise of Donald Trump and the growth of partisan hatred have led many people to start taking the problem of political ignorance and bias more seriously than before. [This] important new book offer[s] insightful diagnoses and potential solutions for these dangers. . . . [It makes] important points and offer[s] valuable insights, particularly when it comes to the role of the internet and social media in our political environment. . . . [It is] essential reading for anyone interested in this pressing subject."—Ilya Somin, Washington Post's Volokh Conspiracy

"#Republic is a timely reminder that unfettered control over the news we choose to consume is appealing, but when it results in partisan silos and rampant fake news, it can also make a deliberative democracy difficult to achieve."—Chayenne Polimedio, Washington Monthly

"A timely and persuasive argument about the risk that online media polarization poses to deliberative democracy in the United States."—Andrew W. Lang, Law Library Journal

"America's leading legal academic gives us a way to address democracy's leading challenge—preserving a public informed enough to govern itself. Drawing on an incredible range of scholarship and experience, this book could not be more timely. Or urgently needed."—Lawrence Lessig, Harvard Law School

"What went wrong with social media and also with democracy? Here's the guy who saw it coming, and yes he does have all the answers."—Lawrence Lessig, Harvard Law School

"With political polarisation on the rise, particularly in the United States, [this book] couldn't come at a more important time."—Stephanie Cutter, former Senior Aide to President Barack Obama and Partner, Precision Strategies

"The Internet has surely enhanced our democracy, with greater access to information and fewer barriers to connecting with each other. However, we're seeing the opposite today with more narrow-minded online platforms and communities, as evidenced by the impact of fake news on this past election.#Republicpointedly captures the risks of the ongoing evolution of social media to our democratic ideals."—Tyler Cowen, author ofThe Great Stagnation