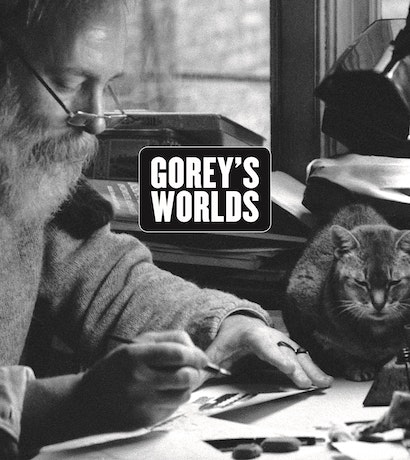 The illustrator, designer, and writer Edward Gorey (1925–2000) is beloved for his droll, surreal, and slightly sinister drawings. While he is perhaps best known for his fanciful, macabre books, such as The Doubtful Guest and The Gashlycrumb Tinies, his instantly recognizable imagery can be seen everywhere from the New Yorker to the opening title sequence of the television series Mystery! on PBS. Gorey’s Worlds delves into the numerous and surprising cultural and artistic sources that influenced Gorey’s unique visual language.

Gorey was an inveterate collector — he called it “accumulating.” A variety of objects shaped his artistic mindset, from works of popular culture to the more than twenty-six thousand books he owned and the art pieces in his vast collection. This collection, which Gorey left to the Wadsworth Atheneum Museum of Art upon his death, is diverse in style, subject, and media, and includes prints by Eugène Delacroix, Charles Meryon, Edvard Munch, and Odilon Redon; photographs by Eugène Atget; and drawings by Balthus, Pierre Bonnard, Charles Burchfield, Bill Traylor, and Édouard Vuillard. As this book shows, these artistic pieces present a visual riddle, as the connections between them—to each other and to Gorey’s works—are significant and enigmatic. The essays in Gorey’s Worlds also examine the artist’s consuming passions for animals and ballet.

Featuring a sumptuous selection of Gorey’s creations alongside his fascinating and diverse collections, Gorey’s Worlds reveals the private world that inspired one of the most idiosyncratic artists of the twentieth century.

Erin Monroe is the Robert H. Schutz Jr. Associate Curator of American Paintings and Sculpture at the Wadsworth Atheneum Museum of Art. She is the author of Andrew Wyeth: Looking Beyond. Robert Greskovic is a dance critic for the Wall Street Journal and the author of Ballet 101. Arnold Arluke is professor emeritus of sociology and anthropology at Northeastern University. His books include Just a Dog and The Photographed Cat. KevinShortsleeve is associate professor of English at Christopher Newport University. His books include Thirteen Monsters Who Should Be Avoided.

"Marvellous images by Bonnard, Delacroix, Munch and other celebrated artists and photographers are vividly juxtaposed with Gorey’s own drawings, while learned essays explore how his passions for (often surprisingly human) animals and ballet remained a constant presence throughout his career."—Matthew Reisz, Times Higher Education

"The title . . . "Gorey’s Worlds" is just right for a project that aims to lay out the genealogy of Gorey’s artistic imagination, by juxtaposing his own work with works from his collection of drawings, prints, photographs, and paintings by some of the artists who were important to him. . . . In the history of the visual and literary arts Gorey’s is a relatively small achievement. But it will endure. Gorey took the exact measure of his imagination. He let it rip—but with the utmost care."—Jed Perl, New York Review of Books

"Gorey's Worlds illuminates the complex creations of artist Edward Gorey by examining his art collection, his love of dance, his linguistic play, and his images of animals. Going beyond well-trodden analyses, this book provides new perspectives on the illustrator and his work."—Heather Campbell Coyle, Delaware Art Museum