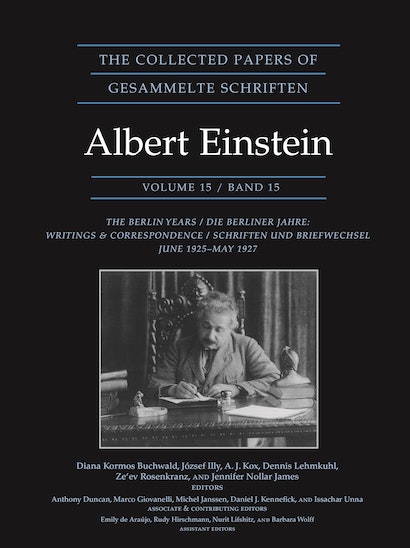 This volume covers one of the most thrilling two-year periods in twentieth-century physics, as matrix mechanics—developed chiefly by W. Heisenberg, M. Born, and P. Jordan—and wave mechanics—developed by E. Schrödinger—supplanted the earlier quantum theory. The almost one hundred writings by Einstein, of which a third have never been published, and the more than thirteen hundred letters show Einstein’s immense productivity and hectic pace of life.

Einstein quickly grasps the conceptual peculiarities involved in the new quantum mechanics, such as the difference between Schrödinger’s wave function and a field defined in spacetime, or the emerging statistical interpretation of both matrix and wave mechanics. Inspired by correspondence with G. Y. Rainich, he investigates with Jakob Grommer the problem of motion in general relativity, hoping for a hint at a new avenue to unified field theory.

Einstein falls victim to scientific fraud when, in a collaboration with E. Rupp, he becomes convinced that the latter’s experiments, aimed at deciding whether excited atoms emit light instantaneously (in quanta) or in a finite time (in waves), confirm a wave-theoretic explanation.

While it was known that the teenage Einstein had been romantically involved with Marie Winteler in 1895, newly discovered documents reveal that his love for Marie was rekindled in 1909–10 while he was still married to Mileva Marić.

The 1925 Locarno Treaties renew Einstein’s optimism in European reconciliation. He backs the “International manifesto against compulsory military service” and continues his participation in the League of Nations’ International Committee on Intellectual Cooperation. He remains intensely committed to the shaping of the Hebrew University in Jerusalem, although his enthusiasm for this cause is sorely tested.

At the California Institute of Technology, Diana Kormos Buchwald is professor of history; A. J. Kox is senior editor and visiting associate in history; József Illyand Ze'ev Rosenkranz are editors and senior researchers in history; Dennis Lehmkuhl is research assistant professor and scientific editor; and Jennifer Nollar James is assistant editor.

"This huge volume holds many surprises for readers, even those familiar with much of the recent literature on Einstein’s science, politics, and public life."—David E. Rowe, Metascience