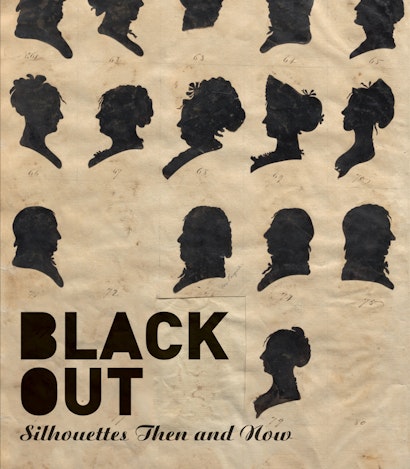 Before the advent of photography in 1839, Americans were consumed by the fashion for silhouette portraits. Economical in every sense, the small, stark profiles cost far less than oil paintings and could be made in minutes. Black Out, the first major publication to focus on the development of silhouettes, gathers leading experts to shed light on the surprisingly complex historical, political, and social underpinnings of this ostensibly simple art form. In its examination of portraits by acclaimed silhouettists, such as Auguste Edouart and William Bache, this richly illustrated volume explores likenesses of everyone from presidents and celebrities to everyday citizens and enslaved people. Ultimately, the book reveals how silhouettes registered the paradoxes of the unstable young nation, roiling with tensions over slavery and political independence.

Primarily tracing the rise of the silhouette in the decades leading up to the Civil War, Black Out also considers the ubiquity of the genre today, particularly in contemporary art. Using silhouettes to address such themes as race, identity, and the notion of the digital self, the four featured living artists — Kara Walker, Kristi Malakoff, Kumi Yamashita, and Camille Utterback—all take the silhouette to unique and fascinating new heights.

Presenting the distinctly American story behind silhouettes, Black Out vividly delves into the historical roots and contemporary interpretations of this evocative, ever popular form of portraiture.

Asma Naeem is curator of prints, drawings, and media arts at the National Portrait Gallery. Penley Knipe is the Philip and Lynn Straus Senior Conservator of Works of Art on Paper at the Harvard Art Museums. Alexander Nemerov is the Carl and Marilynn Thoma Provostial Professor in the Arts and Humanities at Stanford University. Gwendolyn DuBois Shaw is associate professor of American art at the University of Pennsylvania. Anne Verplanck is associate professor of American studies and humanities at Pennsylvania State University, Harrisburg.

"In the catalog Ms. Naeem gives this form's democratic range a place in the progressive pantheon."—Edward Rothstein, Wall Street Journal

"Black Out . . . does the interesting work of considering the history and meaning of the evocative and possibly insidious outlined form. . . . [I]t is the older images that stand out as the most interesting. Less familiar to a majority of readers, the historical context of their creation is particularly rich. . . . In the end, it is the silhouette’s many oppositions and ambiguities that make it so compelling."—Hannah Stamler, Brooklyn Rail

"Readers will come away with a refreshed appreciation of silhouettes, both their significance historically but also their influence on today's artists whose art compels viewers to reflect on identity and its portrayal through time."—Nancy B. Turner, Library Journal

"The catalogue of a 2018–19 exhibition at the National Portrait Gallery, [Black Out] examines an overlooked art form particularly popular in the first part of the 19th century, before the advent of photography. . . . There are 98 excellent pictures, a few in full color, plus pictures of tracing machines. The catalogue proper includes 49 examples, all carefully described. Including notes to sources with commentaries, this volume should become the standard reference on the subject."—Choice

"Presenting the distinctly American story behind the silhouettes in the exhibition, Black Out vividly delves into the historical roots and contemporary interpretations of this evocative, ever popular form of portraiture."—Peter Bower, British Paper Historians Journal

"The book’s strength is that it speaks to the lives of those without power. For this reason, I highly recommend it."—Amy Ione, Leonardo Reviews

"Black Out explores the history and resurgence of the silhouette in America, and traces its political, social, and artisanal roots. Unfolding the silhouette's paradoxes and complexities, this book presents groundbreaking work on silhouettes, including essentially unknown artists, significant original content, and revelatory interpretations."—Jennifer L. Roberts, author of Transporting Visions: The Movement of Images in Early America