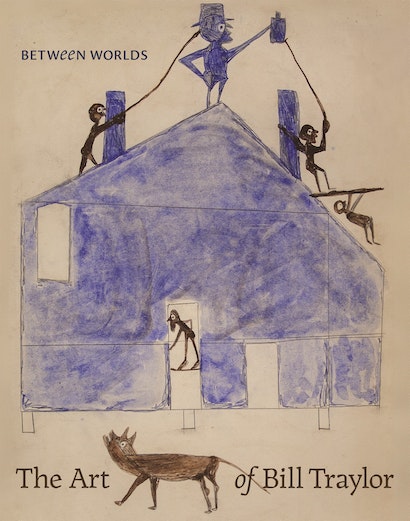 Bill Traylor (ca. 1853–1949) came to art-making on his own and found his creative voice without guidance; today he is remembered as a renowned American artist. Traylor was born into slavery on an Alabama plantation, and his experiences spanned multiple worlds—black and white, rural and urban, old and new—as well as the crucibles that indelibly shaped America—the Civil War, Reconstruction, Jim Crow, and the Great Migration. Between Worlds presents an unparalleled look at the work of this enigmatic and dazzling artist, who blended common imagery with arcane symbolism, narration with abstraction, and personal vision with the beliefs and folkways of his time.

Traylor was about twelve when the Civil War ended. After six more decades of farm labor, he moved, aging and alone, into segregated Montgomery. In the last years of his life, he drew and painted works depicting plantation memories and the rising world of African American culture. Upon his death he left behind over a thousand pieces of art. Between Worlds convenes 205 of his most powerful creations, including a number that have been previously unpublished. This beautiful and carefully researched book assesses Traylor’s biography and stylistic development, and for the first time interprets his scenes as ongoing narratives, conveying enduring, interrelated themes.

Between Worlds reveals one man’s visual record of African American life as a window into the overarching story of his nation.

Published in association with the Smithsonian American Art Museum 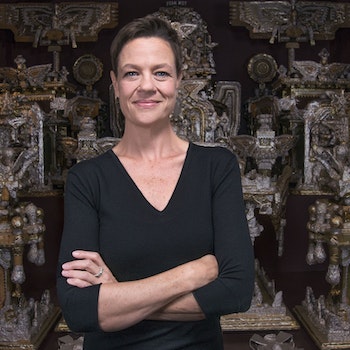 "The most thrilling book of the year."—Roberta Smith, New York Times

"[A] remarkable catalogue, which exhaustively lays out what can be known of Traylor’s life, in its historical context, and of the references in his art."—Peter Schjeldahl, New Yorker

"Traylor’s images . . . now count among the greatest works of 20th-century American art, and thanks to a magnificent catalogue, the artist is obscure no more."—Roberta Smith, New York Times

"The detective work in Between Worlds is so engrossing that one may be forgiven for forgetting that the book is also an exhibition catalogue. It accompanies an extensive retrospective, now at the Smithsonian American Art Museum in Washington, DC, of Bill Traylor’s paintings and drawings. Traylor, who died in 1949, is considered one of the most important 'folk' or 'self-taught' American artists. But this project demonstrates in magisterial manner how his work exceeds these limiting categories. . . . Umberger is refreshingly blunt about the art world’s racial politics, the persistence and consequences of gatekeeping, and the way categories like 'folk art' marginalize the makers of those pieces. She offers deep research into the artist’s like and work as a welcome remedy."—Siddhartha Mitter, Bookforum

"Between Worlds pairs a painstakingly detailed biography with an expansive, object-orientated analysis, the former serving as foundation for the latter."—Annie Monahan, Burlington Magazine

"Leslie Umberger’s compelling text, the result of extensive research, details the social and political context to Traylor’s life and art, and pieces together as much as possible of his family history."—Art Quarterly

"This meticulously researched catalogue . . . serves as a corrective to the persistent stereotyping of black art as primitive. . . . Now, with the Smithsonian exhibition and accompanying catalogue, Bill Traylor’s testimony is available to the wider world."—Fran Bigman, Times Literary Supplement

"[A] major undertaking. . . . [The book] includes chapters on the world in which [Traylor] lived, carefully documented by biographical details from surviving records, and discusses the emergence of his talent during an active period in late life while recounting how his preserved work captured the attention of the art world decades after his death."—Karla Klein Albertson, Antiques and the Arts

"[A] groundbreaking monograph in which Umberger thoroughly reassesses the known facts of Traylor’s life and family, his creative trajectory, and the art world’s discovery of him and positions him within the broader context of American art."—ARTFIX daily

"Between Worlds: The Art of Bill Traylor discusses and illustrates 205 of Traylor’s works, images that are powerfully backdropped by the times he lived in."—Shannon Heupel, Montgomery Advertiser

"Between Worlds: The Art of Bill Traylor is a genuinely unfathomable account. . . . Umberger takes great care in flushing out the worlds between that Traylor’s depictions historically dangled. . . . With over 200 drawings reproduced as examples of various techniques or themes, there is much information to digest. Umberger’s unsurpassed skill as a historian and writer, cuts easily through it all revealing depth and dimension. For the reader not intimidated by the bulk of this volume, approaching six pounds, there is much reward and there are too many insights to list. Even 70 years after his death, his life experience remains critically important to our contemporary settings."—Cindy Helms, New York Journal of Books

"[Leslie] Umberger emerges as the finest interpreter of Traylor’s life and career, proving that she is an American curator and art historian of the first order. . . . At long last, Bill Traylor’s artwork takes center stage to speak to viewers of the pasts of the present. . . . Between Worlds is a testament to the enduring, inclusive genius of Bill Traylor, a man who came from slavery to make a world all his own. Traylor’s paintings remind us of the indomitable creative spirit, enduring beyond this nation’s sins."—Andrew M. Davenport, Los Angeles Review of Books

"A major contribution [and] essential reading for anyone who wants to understand American art in the twentieth century. . . . Umberger’s scrupulously researched book fill[s] in many gaps while overturning long-held assumptions, misinformation and misguided theories about the artist and his work. . . . Umberger writes at length about the historical and cultural circumstances within which Traylor lived and made his art. She fills in a richly detailed background, presents the most complete picture of his life to date, and casts revealing new light on his art. Positioning his work firmly within a cultural context, she rejects any notion of him as an outsider."—Tom Patterson, Raw Vision

"[Leslie Umberger’s] curated volume of Traylor’s life and work is a narrative and visual accomplishment; a beautifully-presented book that captures the marvel and struggle of Traylor’s life, and the uniqueness of his work."—Nick Ripatrazone, Angelus News

"Umberger does justice to [Bill Traylor’s] work and his life story . . . . [a] wonderful book."—Rethinking History

"Leslie Umberger’s monumental catalogue, Between Worlds: The Art of Bill Traylor, which accompanied her 2018 exhibition at the Smithsonian American Art Museum, is a stunning, intensely researched, and moving tribute to a unique figure in the history of American art . . . . The catalogue, which includes more than two hundred gorgeous illustrations of artworks from public and private collections, along with ample reproductions of archival material and historical photographs, make it not only the most comprehensive resource for Traylor’s work, but also an excellent one for those interested in the history of the American South. A bold and brilliant text, contained inside a beautifully produced object, Between Worlds sets the standard for the type of critical scholarship that can be done on an artist once discounted as marginal or an outsider."—Aleesa Pitchamarn Alexander, Panorama: Journal of the Association of Historians of American Art