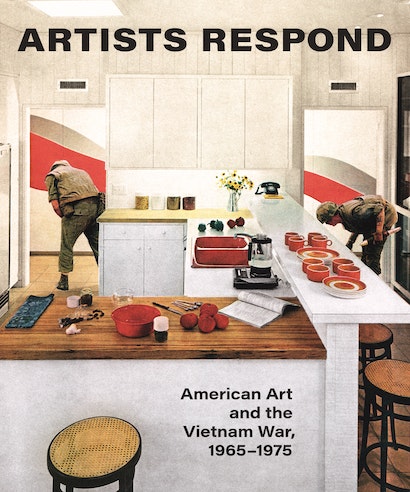 By the late 1960s, the United States was in a pitched conflict in Vietnam, against a foreign enemy, and at home—between Americans for and against the war and the status quo. This powerful book showcases how American artists responded to the war, spanning the period from Lyndon B. Johnson’s fateful decision to deploy U.S. Marines to South Vietnam in 1965 to the fall of Saigon ten years later.

Artists Respond brings together works by many of the most visionary and provocative artists of the period, including Asco, Chris Burden, Judy Chicago, Corita Kent, Leon Golub, David Hammons, Yoko Ono, and Nancy Spero. It explores how the moral urgency of the Vietnam War galvanized American artists in unprecedented ways, challenging them to reimagine the purpose and uses of art and compelling them to become politically engaged on other fronts, such as feminism and civil rights. The book presents an era in which artists struggled to synthesize the turbulent times and participated in a process of free and open questioning inherent to American civic life.

Published in association with the Smithsonian American Art Museum

Melissa Ho is curator of twentieth-century art at the Smithsonian American Art Museum. Her books include Shirin Neshat: Facing History. Thomas Crow is the Rosalie Solow Professor of Modern Art at the Institute of Fine Arts, New York University. His books include Restoration: The Fall of Napoleon in the Course of European Art, 1812–1820 (Princeton). Erica Levin is assistant professor in the Department of History of Art at Ohio State University. Katherine Markoski is an independent historian. Mignon Nixon is professor of modern and contemporary art at University College London and an editor at October. Martha Rosler is an American artist and the author of Culture Class and Decoys and Disruptions: Selected Writings, 1975–2001.

"[An] exceptional, you gotta own it, exhibition catalog."—Modern Art Notes Podcast

"Artists Respond is an outstanding book that makes an important contribution to the study of the Vietnam War. These engagingly written essays will attract a wide and appreciative readership."—Mark Philip Bradley, author of The World Reimagined: Americans and Human Rights in the Twentieth Century