A revealing look at U.S. imperialism through the lens of visual culture and portraiture 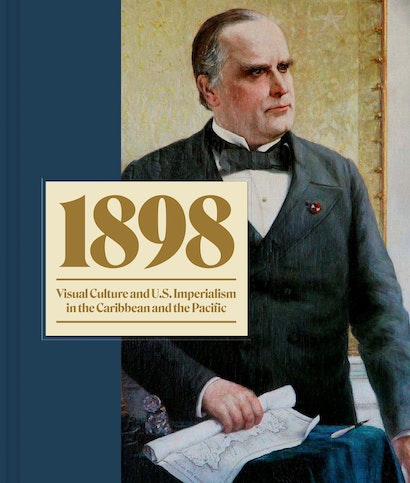 In 1898, the United States seized territories overseas, ushering in an era of expansion that was at odds with the nation’s founding promise of freedom and democracy for all. This book draws on portraiture and visual culture to provide fresh perspectives on this crucial yet underappreciated period in history.

Taína Caragol and Kate Clarke Lemay tell the story of 1898 by bringing together portraits of U.S. figures who favored overseas expansion, such as William McKinley and Theodore Roosevelt, with those of leading figures who resisted colonization, including Eugenio María de Hostos of Puerto Rico; José Martí of Cuba; Felipe Agoncillo of the Philippines; Padre Jose Bernardo Palomo of Guam; and Queen Lili‘uokalani of Hawai‘i. Throughout the book, Caragol and Lemay also look at landscapes, naval scenes, and ephemera. They consider works of art by important period artists Winslow Homer and Armando Menocal as well as contemporary artists such as Maia Cruz Palileo, Stephanie Syjuco, and Miguel Luciano. Paul A. Kramer’s essay addresses the role of the Smithsonian Institution in supporting imperialism, and texts by Jorge Duany, Theodore S. Gonzalves, Kristin L. Hoganson, Healoha Johnston, and Neil Weare offer critical perspectives by experts with close personal or scholarly relations to the island regions.

Beautifully illustrated, 1898: Visual Culture and U.S. Imperialism in the Caribbean and the Pacific challenges us to reconsider the Spanish-American War, the Philippine-American War, and the annexation of Hawai‘i while shedding needed light on the lasting impacts of U.S. imperialism.