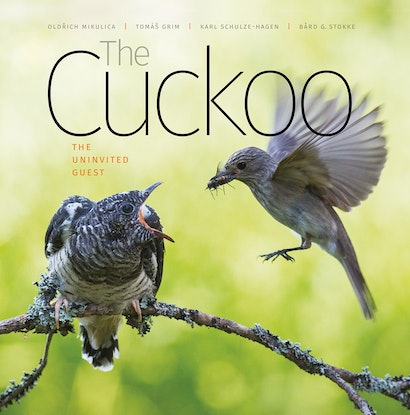 We all know Cuckoos as the harbingers of spring – whose haunting calls proclaim the birds own name across fields and reedbeds. A bird much more often heard than actually seen, and often mistaken for a hawk or falcon when briefly glimpsed in flight. Cuckoos are also well known, perhaps even infamous, for their habit of laying their own eggs into the nests of much smaller species, such as reed warblers, who are then doomed to raise the enormous cuckoo chick rather than their own young, and whose eggs are ruthlessly thrown from the nest by the cuckoo hatchling.

But how does this complex behaviour act out in nature, and how did it evolve? What are the cuckoo’s special tricks and what counter-measures have the host birds developed to resist the depredations of cuckoos? In this book the authors delve into the stories behind what we see, and into the complex and ever evolving evolutionary arms race by which the nest parasite and its hosts constantly try to leapfrog each other into prime position. The natural history of the cuckoo-host struggle is illuminated with detailed explanations of the results of behavioural and ecological research to provide a comprehensive, but highly readable, account in which an insight into one puzzle constantly reveals a new question begging an answer.

The whole story is brought vividly to life through the astonishing photographs of Oldo Mikulica, who has watched cuckoos and their various hosts from hides for almost four decades. The result is a unique and beautiful book which both informs and delights.

"The images . . . . are presented in a wonderfully effective and comprehensive way. This isn’t simply a picture book, however – the text has an accessible, engaging style, and is up to date, scholarly and eminently readable."—Tim Birkhead, BBC Wildlife

"This book is a classic, and the photography achieves a new level of excellence."—Rob Hume, Birdwatch

"An impressive piece of work. This book is a real delight: it sets a new standard for books of its type."—Ian Carter, British Birds

"[The] highly informative narrative perfectly accompanies the photographic story, documenting all aspects of Cuckoo biology and ecology . . . . breathtaking camera work, sensitively illustrating every facet of the life of this fascinating species"—Justin Walker, British Trust for Ornithology

"If you can’t get out to see or hear cuckoos in summer, be patient and read this excellent book instead. It’s a tonic."—Eric Brown, News Shopper

‘A wonderful book! Never before have the lives of cuckoos been revealed in such extraordinary, aesthetic, intimate detail.’—Tim Birkhead, scientist and author of ‘The Most Perfect Thing: the Inside (and Outside) of a Bird’s egg’.

‘The most fascinating illustration of cuckoo behaviour and ecology I have ever appreciated.’—Franz Bairlein, Director, Institute of Avian Research, Germany. President, International Ornithologists’ Union.