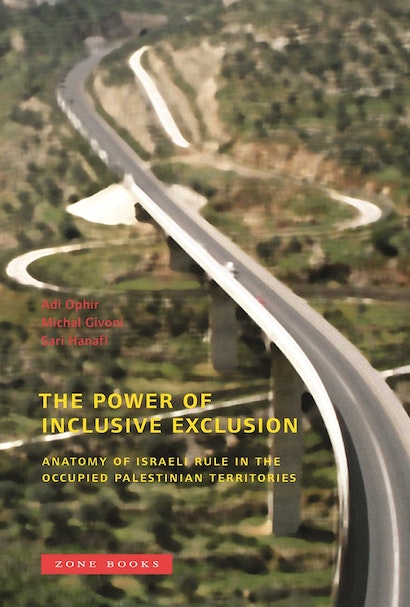 On the eve of its fifth decade, the Israeli occupation in the Palestinian territories can no longer be considered a temporary aberration. In the shadow of the Oslo process, the second Intifada and the “disengagement” from and recurring assaults on Gaza, Israel’s control over Palestinian life, society, space, and land has become firmly entrenched, while acquiring more sophisticated and enduring forms.

The Power of Inclusive Exclusion analyzes the Israeli occupation as a rationalized system of political rule. With essays by leading Palestinian and Israeli scholars, a comprehensive chronology, photography, and original documents, The Power of Inclusive Exclusion calls into question prevalent views of the occupation as either a skewed form of brutal colonization, a type of Jewish apartheid, or an inevitable piecemeal and improvised response to terrorism.

Engaging a variety of disciplinary and intellectual perspectives, the writers address the fundamental and contemporary dimensions of the occupation regime — its unpredictable bureaucratic apparatus, the fragmentation of space and regulation of movement, the intricate tapestry of law and regulations, the discriminatory control over economic flows, and the calculated use of military violence.

Pretending neither to sidestep the issue of Israel’s responsibility for the Palestinian plight nor to portray the occupation as a coherent, premeditated project, The Power of Inclusive Exclusion uncovers the structural logic that sustains and reproduces this occupation regime. Sensitive to the specific features of the Israeli occupation, this meticulous collection nonetheless strives to unravel the similarities this occupation shares with other international and contemporary forms of discriminatory rule.

In a time when military occupations are emerging globally, political disasters abound, and protracted control over groups of noncitizens has been normalized, The Power of Inclusive Exclusion provides a new set of categories crucial to our understanding of emergency regimes and duly identifies the stakes necessary for an informed and timely opposition.

“This is a remarkably powerful book whose very form underscores the precision and thoughtfulness of its conception. For those readers interested in the most incisive analyses to date of the principles that inform the multiple and intricate technologies of Israeli governance over Palestinians in the Occupied Territories, this book is unparalleled. In a breathtaking set of essays that provide the chronologies of the occupation, the geographies of disaster, and the visual archives of destruction, and the visual archives of destruction, this collaboration yields more than new insights into how governance is intensified and sustained”—Ann Laura Stoler, Willy Brandt Distinguished University Professor of Anthropology and Historical Studies, The New School for Social Research