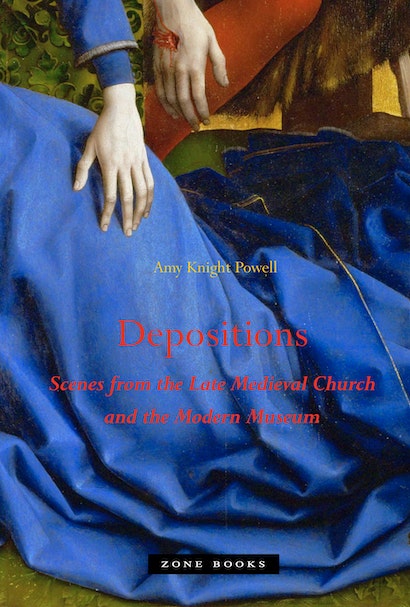 From late medieval reenactments of the Deposition from the Cross to Sol Lewitt’s “Buried Cube,” Depositions is about taking down images and about images that anticipate being taken down. Foretelling their own depositions, as well as their re-elevations in contexts far from those in which they were made, the images studied in this book reveal themselves to be untimely — no truer to their first appearance than to their later reappearances.

In Depositions, Amy Knight Powell makes the case that late medieval paintings and ritual reenactments of the Deposition from the Cross not only picture the deposition of Christ (the imago Dei) but also allegorize the deposition of the image as such and, in so doing, prefigure the lowering of “dead images” during the Protestant Reformation. Late medieval pre-figurations of Reformation iconoclasm anticipate, in turn, the repeated “deaths” of art since the advent of photography: that is the premise of the vignettes devoted to twentieth-century works of art that conclude each chapter of this book.

In these vignettes, images that once stood in late medieval churches now find themselves among works of art from the more recent past with which they share certain formal characteristics. These surreal encounters compel us to reckon with affinities between images from different times and places. Turning on its head the pejorative (art-historical) use of the term pseudomorphosis — formal resemblance where there is no similarity of artistic intent — Powell explores what happens to our understanding of historically and conceptually distant works of art when they look alike.

"Powell’s Depositions has the capacity to change the terms of debate in art history in fundamental and necessary ways."—Common Knowledge

“Amy Powell explores a Renaissance icon through the prism of later adaptations. Rogier van der Weyden’s Deposition is itself the icon of posteriority: the Crucifixion has taken place and mourners receive Christ’s corpse. In a courageous mix of history and criticism, Powell makes that deferred action reverberate in an historical future that includes contemporary art. Through controlled anachronism, she takes us deep into the uncanny timeframe of visual images, where everything is déjà vu.”— Joseph Leo Koerner, Harvard University