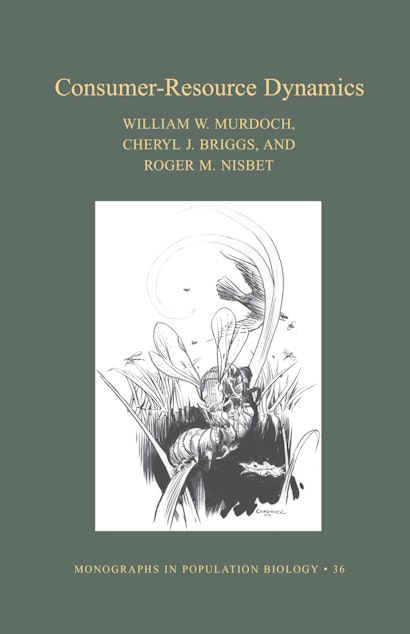 Despite often violent fluctuations in nature, species extinction is rare. California red scale, a potentially devastating pest of citrus, has been suppressed for fifty years in California to extremely low yet stable densities by its controlling parasitoid. Some larch budmoth populations undergo extreme cycles; others never cycle. In Consumer-Resource Dynamics, William Murdoch, Cherie Briggs, and Roger Nisbet use these and numerous other biological examples to lay the groundwork for a unifying theory applicable to predator-prey, parasitoid-host, and other consumer-resource interactions. Throughout, the focus is on how the properties of real organisms affect population dynamics.


The core of the book synthesizes and extends the authors’ own models involving insect parasitoids and their hosts, and explores in depth how consumer species compete for a dynamic resource. The emerging general consumer-resource theory accounts for how consumers respond to differences among individuals in the resource population. From here the authors move to other models of consumer-resource dynamics and population dynamics in general. Consideration of empirical examples, key concepts, and a necessary review of simple models is followed by examination of spatial processes affecting dynamics, and of implications for biological control of pest organisms. The book establishes the coherence and broad applicability of consumer-resource theory and connects it to single-species dynamics. It closes by stressing the theory’s value as a hierarchy of models that allows both generality and testability in the field.

"The authors . . . have succeeded in presenting some complex mathematics within a matrix of verbal clarity, which is rare among such books."—Bulletin of the British Ecological Society

"Consumer Resource Dynamics needs to be on any ecological theorist's bookshelf. . . . A careful, detailed analysis, and a well-written book."—Patrick Foley, Ecology

"Murdoch, Briggs, and Nisbet provide the most insightful development of cohesive ecological theory to have appeared in decades. For those who would say ecology is not making progress, this is the book with which to refute such uninspired myopia. In this era of 'applied' and 'relevant ecology,' a theory book might seem out of place. But we all need to read this book to remind ourselves how hard it is to really understand nature, and to appreciate the discipline of thinking required when deciphering the consequences of those environmental hazards from which we recoil."—Peter Kareiva, Lead Scientist, The Nature Conservancy

"This is a very important, well-written, and well-organized book. Its major contribution is in showing that real consumer-resource dynamics can in fact be understood using a unified theoretical framework. It will appeal to population ecologists but also to applied mathematicians, and will serve as an entrée into theoretical ecology for those with less of a theoretical bent."—Alan Hastings, University of California, Davis

"Consumer-Resource Dynamics is an important book that fills a significant void in the field of theoretical ecology. It brings together the seemingly disparate components of consumer-resource theory under a unifying framework, successfully tackles the challenge of developing models that are both general and testable, and makes complicated mathematical theory accessible to the more empirical minded ecologist. Unlike most books in the field, it presents new theory and new insights, and suggests new empirical directions to pursue. Very well written, it will find a wide audience, from theorists to empiricists, from students to professors, and from basic scientists to applied researchers. It will provide food for thought even to those who are experts in the field."—Priyanga Amarasekare, University of Chicago