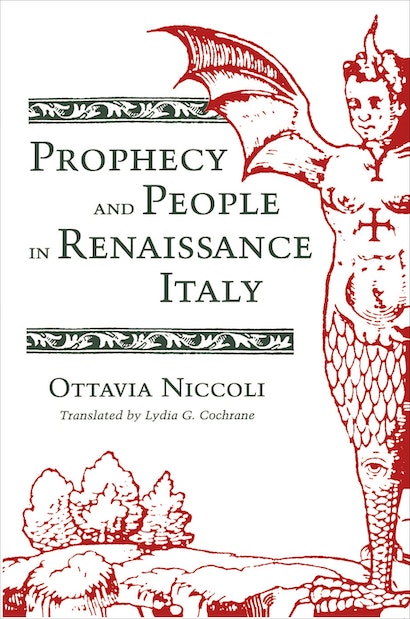 In the midst of the religious ferment, foreign invasions, and internal political strife that beset Italy before the full effects of the Counter-Reformation, the powerful and humble alike turned to popular prophecy for guidance and solace. Ottavia Niccoli examines here the forms of these prophecies — including interpretations of natural disasters, abnormal births, floods, and planetary conjunctions — and gives examples of how they were transmitted from the lower classes to the elite through street singers, apocalyptic preachers, astrologers, and printers. By tracing the ongoing revision of the prophecies, Niccoli reveals them as an indication of how various levels of society viewed events of the time, as a form of propaganda for such causes as anti-Lutheranism, and as a reflection of the interaction between “high” and “low” culture.


Based on popular leaflets, diaries, civic chronicles, and iconographic sources, this book explores the expression of a culture in which nature, religion, and politics formed a unified system with a uniform code of interpretation. It connects the decline of prophecy in Italy with the end of the Italian wars and the beginning of the Counter-Reformation, when popular preaching was banned and charismatic religion discouraged.

"This book presents an excellent, painstaking reconstruction of the 'culture of prophecy' in Italy during the traumatic period of foreign invasion and religious schism between 1480 and 1530.... This erudite, carefully argued book is dense and compact, but reads extremely well.... This book provides a brilliant example of how the study of popular culture can reinvigorate traditional historical narrative."—The Sixteenth Century Journal