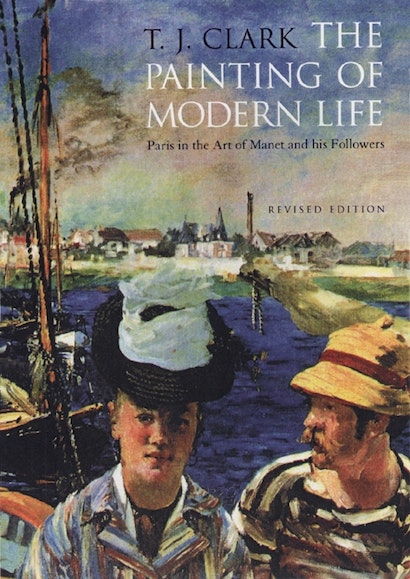 The Paris of the 1860s and 1870s was supposedly a brand-new city, equipped with boulevards, cafés, parks, and suburban pleasure grounds — the birthplace of those habits of commerce and leisure that constitute “modern life.” Questioning those who view Impressionism solely in terms of artistic technique, T. J. Clark describes the painting of Manet, Degas, Seurat, and others as an attempt to give form to that modernity and seek out its typical representatives — be they bar-maids, boaters, prostitutes, sightseers, or petits bourgeois lunching on the grass. The central question of The Painting of Modern Life is this: did modern painting as it came into being celebrate the consumer-oriented culture of the Paris of Napoleon III, or open it to critical scrutiny? The revised edition of this classic book includes a new preface by the author.

T. J. Clark is Chancellor's Professor of Modern Art at the University of California, Berkeley, and the author of Image of the People: Gustave Courbet and the 1848 Revolution, The Absolute Bourgeois: Artists and Politics in France, 1848-1851, and Farewell to an Idea: Episodes from a History of Modernism.

"The Painting of Modern Life is a very good and very beautiful book. It deserves the closest critical attention.... It is a book that will stir up passion and controversy."—David Harvey, Journal of Historical Geography

"That he restores a social and historical context to the work he discusses—from Manet's Musique aux Tuileries to Seurat's Grande Jatte—is not what is most original about Clark's book, elegant and telling as his delineation generally is.... What really lifts the book into a category of its own is the manner in which the assimilation of contextual detail and the observation of pictorial detail are worked together into an argument."—Charles Harrison, Art Monthly

"Mr. Clark ... writes with considerable verve; his interpretations of individual paintings are often illuminating, and he is soaked in the social history of the period with which he deals."—John Gross, The New York Times

"Like everything that T. J. Clark writes, [this] book bubbles with new ideas and old ideas freshly turned; it is intriguing, suggestive and well written."—Eugen Weber, The Times Literary Supplement