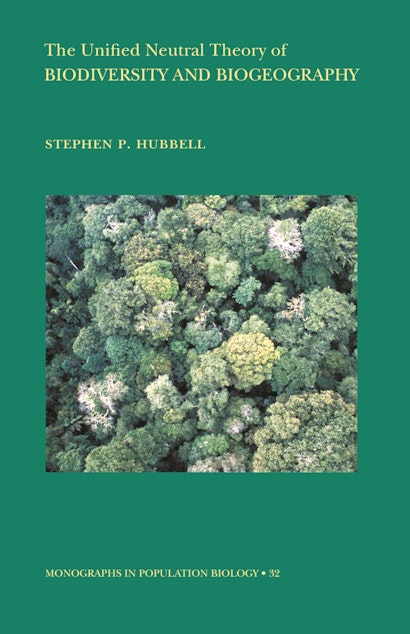 Despite its supreme importance and the threat of its global crash, biodiversity remains poorly understood both empirically and theoretically. This ambitious book presents a new, general neutral theory to explain the origin, maintenance, and loss of biodiversity in a biogeographic context.


Until now biogeography (the study of the geographic distribution of species) and biodiversity (the study of species richness and relative species abundance) have had largely disjunct intellectual histories. In this book, Stephen Hubbell develops a formal mathematical theory that unifies these two fields. When a speciation process is incorporated into Robert H. MacArthur and Edward O. Wilson’s now classical theory of island biogeography, the generalized theory predicts the existence of a universal, dimensionless biodiversity number. In the theory, this fundamental biodiversity number, together with the migration or dispersal rate, completely determines the steady-state distribution of species richness and relative species abundance on local to large geographic spatial scales and short-term to evolutionary time scales.


Although neutral, Hubbell’s theory is nevertheless able to generate many nonobvious, testable, and remarkably accurate quantitative predictions about biodiversity and biogeography. In many ways Hubbell’s theory is the ecological analog to the neutral theory of genetic drift in genetics. The unified neutral theory of biogeography and biodiversity should stimulate research in new theoretical and empirical directions by ecologists, evolutionary biologists, and biogeographers.

Stephen P. Hubbell is Professor of Plant Biology at the University of Georgia and Staff Scientist at the Smithsonian Tropical Research Institute in Panama. He is the author of more than one hundred papers in tropical plant ecology, theoretical ecology, and plant-animal interactions. He has been awarded a Guggenheim Fellowship and the Pew Scholar Award in Conservation and the Environment. He is Chairman of the National Council for Science and the Environment (formerly the Committee for the National Institute for the Environment) and the inventor of Extinction: The Game of Ecology.

"Highly innovative and insightful. . . . Ideas are conveyed clearly and the addition of summary points at the end of each chapter facilitates assimilation.""—Richard T. Busing, Ecological Engineering

"Hubbell's book is a very exciting one, deeply original, based on extensive field data, and convincing in its 'simple' explanations of many broad-scale patterns in biodiversity and biogeography. It will probably cause controversies, but primarily stimulate further research."—Gottfried Jetschke, Ecology

"[This] is a rich book about an idea that has the power to re-produce generic patterns and that will be in the back of your mind when you, again, try to make sense of the plethora of articles on species diversity, abundance and distribution."—Carsten F. Dormann, Basic and Applied Ecology

"A rich book about an idea that has the power to re-produce generic patterns and that will be in the back of your mind when you, again, try to make sense of the plethora of articles on species diversity, abundance and distribution. . . . Once you start reading it, you will find it not a page too long."—Carsten F. Dormann, Basic Applied Ecology

"This is an important contribution to the development of a much sought-after explanation of pattern and process in an increasingly threatened global resource."—Michael E. Meadows, Environmental Conservation

"Hubbell has produced a book for all those who think about how communities are put together, even the not so mathematically minded. . . . [It] is sure to influence how community ecology is done for years to come."—Sandra Knapp, Biological Conservation

"This provocative and enlightening work, deeply original and supported by some of the most extensive field research ever conducted in biology, will be regarded as one of the most important contributions to ecology and biogeography of the past half century."—Edward O. Wilson, author of Biodiversity

"This book should be a true landmark, a revolutionary and compelling treatment that can do for community ecology what neutrality theory did for molecular and population genetics. Building on the conceptual foundations of island biogeography, Hubbell erects a grand null hypothesis establishing, in this case, a novel conceptual framework for virtually all further attempts at interpetating the composite distributions and abundances of species, in any environment and at any trophic level. I hope that this work will be discussed and embraced by the ecological community to the extent that it clearly merits."—John Avise, University of Georgia

"This book presents a new theory that seeks to unify the two approaches of population biology: biodiversity and biogeography. I expect that it will immediately be considered essential reading by biogeographers and ecologists. . . . Its review of the literature is extensive and valuable. The author's writing style is graceful and reads well."—Jared Diamond, author of Guns, Germs, and Steel

"This book is important and inspiring. It will surely stimulate renewed and long overdue interest in broad-scale patterns of species distributions and abundances—the core of community ecology."—Mark A. McPeek, Dartmouth College