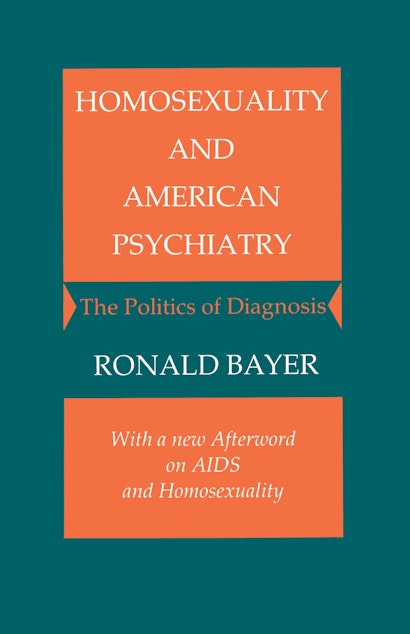 In 1973, after several years of bitter dispute, the Board of Trustees
of the American Psychiatric Association decided to remove homosexuality from its official list of mental diseases. Infuriated by the
Board’s action, a substantial number of dissident psychiatrists
charged the association’s leadership with capitulating to the pressures
of Gay Liberation groups, and forced the board to submit its decision
to a referendum of the full APA membership. Ronald Bayer presents
a political analysis of the psychiatric battle involved, from the first
confrontations organized by gay demonstrators at psychiatric conventions to the referendum initiated by orthodox psychiatrists. The result is a fascinating view of the individuals who led the debate and the fundamental questions that engaged them: social and cultural values, the definition of disease, and the nature of sexuality. Available for the
first time in paperback, the book includes a new afterword by the
author.

"Bayer's job in his tight, extraordinary packed bullet of a book is a particular one: to tell us what was at stake when the A.P.A. erased homosexuality from its list of mental diseases in 1973.... Bayer's book takes us behind the scenes of this uneasy linguistic victory in a way we have never been taken before."—The Nation

"Ronald Bayer has now written a lucid, succinct, and eminently fair-minded account of the controversy, which resulted in the removal of homosexuality from the Association's Diagnostic and Statistical Manual of Psychiatric Disorders."—Paul Robinson, The New Republic