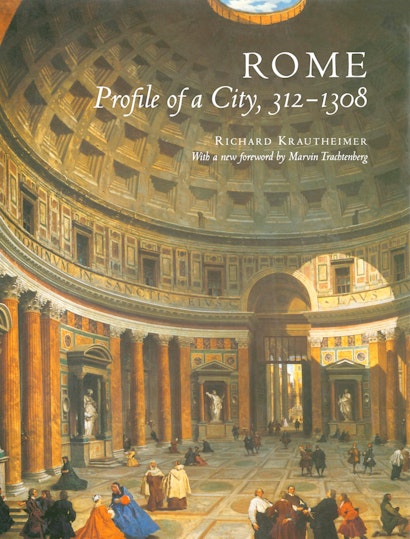 In this classic study, surveying the city’s life from Christian Antiquity through the Middle Ages, Richard Krautheimer focuses on monuments of art and architecture as they reflect the historical events, the ideological currents, and the meaning Rome held for its contemporaries. Lavishly illustrated, this book tells an intriguing story in which the heritage of antiquity intertwines with the living presence of Christianity. Written by one of the great art historians of our time, it offers a profile of the Eternal City unlike any drawn in the past or likely to be drawn in the future.


“Krautheimer was never (or only rarely) interested in studying heavily researched subjects, in valorizing what was already valorized, in reconquering what had long been conquered and reconquered. He was at heart a pioneer, a discoverer, a master of uncharted scholarly terrain in an age when so many things art historical were thought to be understood.” — From the preface by Marvin Trachtenberg
?

Richard Krautheimer was Professor at the Institute of Fine Arts at New York University. He authored numerous works, including The Rome of Alexander VII, 1655-1667 and Lorenzo Ghiberti (both Princeton).

"Krautheimer's book shows us what history and art history can be when they are truly combined."—Speculum

"It would be difficult to find a word other than masterpiece to describe this book."—Church History

"Everyone should be grateful for this learned and humane work, which combines a powerful grasp of the principles and minutiae of the history of Western art with a detailed topographical grasp of this complex city."—The New York Review of Books

"The new edition of the Profile is a welcome return of an unsurpassed study of a period of Rome's history that is difficult to tell . . . [It] is difficult to find fault in such an undertaking or to review its significance when few would dare attempt the same project today."—C.M. Richardson, The Art Book