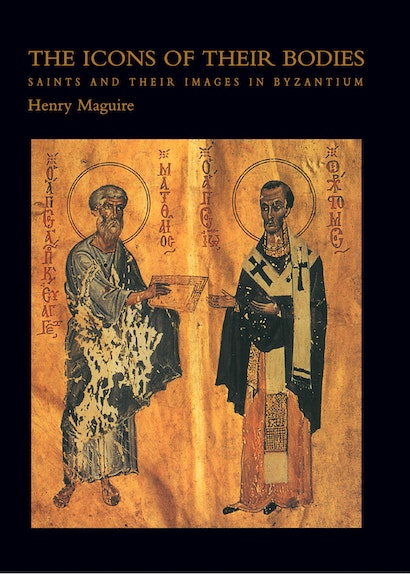 The Byzantines surrounded themselves with their saints, invisible but constant companions, who were made visible by dreams, visions, and art. The composition and presentation of this imagined gallery followed a logical structure, a construct that was itself a collective work of art created by Byzantine society. The purpose of this book is to analyze the logic of the saint’s image in Byzantium, both in portraits and in narrative scenes. Here Henry Maguire argues that the Byzantines gave to their images differing formal characteristics of movement, modeling, depth, and differentiation, according to the tasks that the icons were called upon to perform in the all-important business of communication between the visible and the invisible worlds.


The book draws extensively on sources that have been relatively little utilized by art historians. It considers both domestic and ecclesiastical artifacts, showing how the former raised the problem of access by lay men and women to the supernatural and fueled the debates concerning the role of images in the Christian cult. Special attention is paid to the poems inscribed by the Byzantines upon their icons, and to the written lives of their saints, texts that offer the most direct and vivid insight into the everyday experience of art in Byzantium. The overall purpose of the book is to provide a new view of Byzantine art, one that integrates formal analysis with both theology and social history.

Henry Maguire is Professor of Art History at the University of Illinois, Urbana-Champaign. From 1991 to 1996 he served as Director of Byzantine Studies at Dumbarton Oaks. His books include Art and Eloquence in Byzantium (Princeton), and he was a contributor to The Glory of Byzantium.

"Anyone who has more than a passing interest in icons will find Maguire's book extremely helpful. He provides a decoding of the iconographical tradition that helps us gain a more perceptive eye."—Lawrence S. Cunningham, Commonweal

"Henry Maguire's study of saints' images in Byzantine art is a timely contribution to the study of Byzantine saints.... The merits of Maguire's book, however, go even further.... This study provides ample evidence that medieval artists were able to employ a varied register of different 'languages' and contradicts the still widespread notion that medieval artists were caught up in a particular 'style.'"—Barbara Zeitler, American Journal of Archaeology

"A book that is written with striking lucidity, admirable command, and even daring."—Glenn Peers, Speculum

"Eunice Maguire and Henry Maguire bring to their project a long and learned experience of Byzantium. From texts to textiles, no one in the field has a greater depth of familiarity with such a range of cultural artifacts. By putting the 'margins' of traditional art—architectural ornament, ceramics, 'minor' arts, and the like—at the center of their study, the authors reveal the imaginative and often subversive power of Byzantine artistic imagination."—Choice