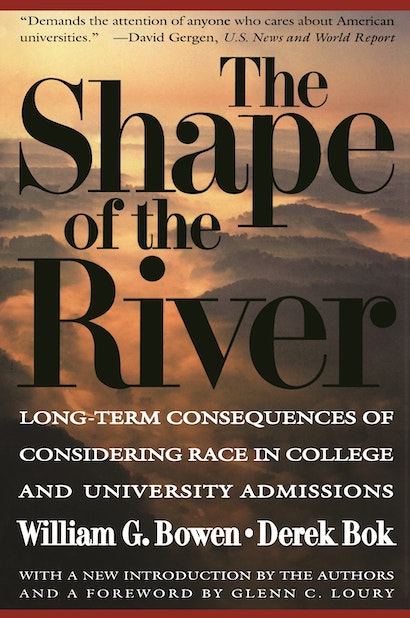 This is the book that has forever changed the debate on affirmative action in America. The Shape of the River is the most far-reaching and comprehensive study of its kind. It brings a wealth of empirical evidence to bear on how race-sensitive admissions policies actually work and clearly defines the effects they have had on over 45,000 students of different races. Its conclusions mark a turning point in national discussions of affirmative action — anything less than factual evidence will no longer suffice in any serious debate of this vital question.

Glenn Loury’s new foreword revisits the basic logic behind race-sensitive policies, asserting that since individuals use race to conceptualize themselves, we must be conscious of race as we try to create rules for a just society. Loury underscores the need for confronting opinion with fact so we can better see the distinction between the “morality of color-blindness” and the “morality of racial justice.”

William G. Bowen (1933-2016) was president emeritus of The Andrew W. Mellon Foundation and Princeton University and founding chairman of ITHAKA.. His many books included The Shape of the River: Long-Term Consequences of Considering Race in College and University Admissions (with Derek Bok) (Princeton). Derek Bok is the 300th Anniversary University Research Professor at Harvard University, where he served as president from 1971 to 1991, and again as interim president from 2006 to 2007.

"The most ambitious and authoritative study to date of the effects of affirmative action in higher education, . . . a serious (though accessible) work of research, . . . an important corrective to conservative propaganda masquerading as social science."—Ellis Cose, Newsweek

"A compelling new book . . . demonstrates why affirmative action programs can be good for the country. . . . The authors prove with facts, not anecdotes, that affirmative action works. . . . With the presidential commission having fallen flat in trying to advance the national discussion on race, it may be the smaller-scale efforts, like the Bowen and Bok book, that better lay the groundwork for long-term change."—Los Angeles Times

"No study of this magnitude has been attempted before. Its findings provide a strong rationale for opposing current efforts to demolish race-sensitive policies in colleges across the country. . . . The evidence collected flatly refutes many of the misimpressions of affirmative-action opponents."—The New York Times

"The Shape of the River is the most comprehensive study ever done of affirmative action in higher education, and it demands the attention of anyone who cares about American universities."—David Gergen, U.S. News and World Report

"The Shape of the River . . . offers much more comprehensive statistics and much more sophisticated analysis than has been available before. Impressionistic and anecdotal evidence will no longer suffice: any respectable discussion of the consequences of affirmative action in universities must now either acknowledge its findings or challenge them, and any challenge must match the standards of breadth and statistical professionalism that Bowen, Bok, and their colleagues have achieved."—Ronald Dworkin, New York Review of Books

"What is good for business in this case is good for society too—good for us all. This report may, at last, make that fact evident even to the most obtuse."—Garry Wills, The Plain Dealer

"On the strength of [the authors'] credentials the reader can expect much, and much is delivered.... The Shape of the River is a monumental achievement. Its foundation is so solidly anchored to a bedrock of data that it will be relied upon as a navigational beacon for years to come."—Robert E. Thatch, Science

"Written by two of the most respected figures in higher education, The Shape of the River offers to the public what has long been needed: a large dose of crucial, unvarnished fact about affirmative action. Mining new and sensitive information, Bowen and Bok present an analysis that is careful, clear, comprehensive, and, above all, candid. No work tells us nearly as much as this one about the social costs and benefits of affirmative action in our colleges and universities. A brilliant scholarly performance, The Shape of the River should be essential reading for anyone seeking a dependable guide through the morass of competing claims that obscure from public attention the questions that need to be posed and the answers that need to be assessed."—Randall Kennedy, Harvard Law School

"This important book is a calm, expert, analytical study of race-sensitive college admissions, and what happens afterwards. There is nothing else in the same league. It tells us many things we didn't know, because until now there was no way to know them. The deepest question is: can we make social policy in this area on the basis of fact and reason, or will it all dissolve in ideological certainty?"—Robert M. Solow, Massachusetts Institute of Technology, Nobel Laureate in Economics

"Instead of relying on preconceived notions and conventional wisdom about race in college and university admissions, Bill Bowen and Derek Bok use facts to examine the record. The result is an invaluable resource for those interested in American higher education and more generally, race in America. It shows that merit and diverse student bodies can be complementary goals and that individuals who have benefited from the policy have gone on to excel as contributing members to the life of our country."—Senator Bill Bradley

"With its persuasive evidence about the positive effects of higher education on the social, civic, and economic lives of African Americans, The Shape of the River is a real eye-opener. William Bowen and Derek Bok have brought erudition and hands-on experience to the debate over race-sensitive admissions. For all readers struggling to reconcile principles of fairness with the needs of the society, this book offers even-handed appraisals and a wealth of new and compelling facts."—Anne Armstrong, Former Ambassador to Great Britain and Chairman of the Board of Trustees of the Center for Strategic and International Studies

"This is a fascinating 'must read' book. The authors use a newly constructed database to elucidate the role that highly selective undergraduate colleges play in shaping individual life courses of black Americans and in contributing to the texture and robustness of our society. The issue of race-sensitive admissions is elegantly framed while the reader comes to appreciate the subtleties of the college educational experience . . . an exciting read!"—John Reed, Chairman and CEO, Citicorp