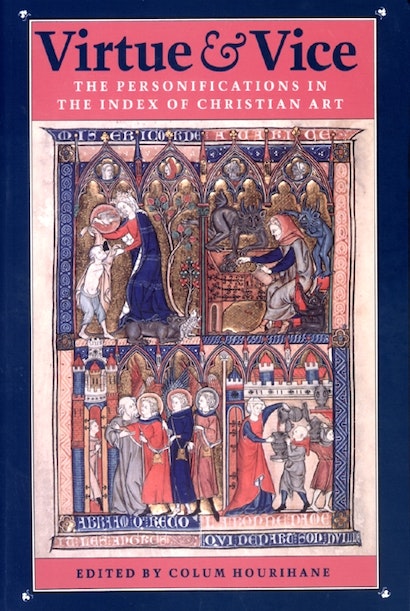 The concept of opposing forces of good and evil expressed in a broad range of moral qualities — virtues and vices — is one of the most dominant themes in the history of Christian art. The complex interrelationship of these moral traits received considerable study in the medieval period, resulting in a vast and elaborate system of imagery that has been largely neglected by modern scholarship. Rich resources for the study of this important subject are made available by this volume, which publishes the complete holdings of the more than 230 personifications of Virtues and Vices in the Index of Christian Art’s text files. Ranging from Abstinence to Wisdom and from Ambition to Wrath, and covering depictions of the Tree of Virtues, the Tree of Vices, and the Conflict of Virtues and Vices, this is the largest and most comprehensive collection of such personifications in existence. The catalogue documents the occurrence of these Virtues and Vices in well over 1,000 works of art produced between the fifth and the fifteenth centuries. The entries include objects in twelve different media and give detailed information on their current location, date, and subject.


This extract from the Index of Christian Art’s files, the first to be published, is accompanied by six essays devoted to the theme of virtue and vice. They investigate topics such as the didactic function of the bestiaries and the Physiologus, female personifications in the Psychomachia of Prudentius, the Virtues in the Floreffe Bible frontispiece, and good and evil in the architectural sculpture of German sacramentary houses. The contributors are Ron Baxter, Anne-Marie Bouché, Jesse M. Gellrich, S. Georgia Nugent, Colum Hourihane, and Achim Timmerman.

Colum Hourihane is Director of the Index of Christian Art, Princeton University.