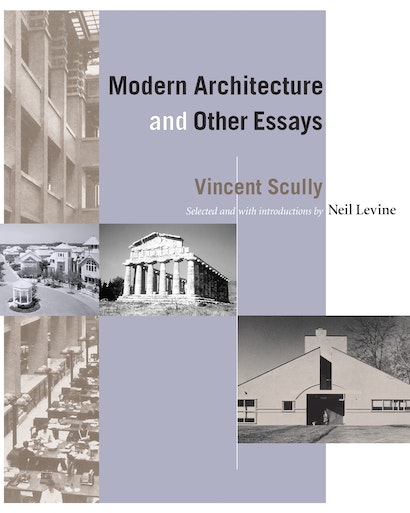 Vincent Scully has shaped not only how we view the evolution of architecture in the twentieth century but also the course of that evolution itself. Combining the modes of historian and critic in unique and compelling ways — with an audience that reaches from students and scholars to professional architects and ardent amateurs — Scully has profoundly influenced the way architecture is thought about and made.


This extensively illustrated and elegantly designed volume distills Scully’s incalculable contribution. Neil Levine, a former student of Scully’s, selects twenty essays that reveal the breadth and depth of Scully’s work from the 1950s through the 1990s. The pieces are included for their singular contribution to our understanding of modern architecture as well as their relative unavailability to current readers. Levine offers a perceptive overview of Scully’s distinguished career and introduces each essay, skillfully setting the scholarly and cultural scene. The selections address almost all of modern architecture’s major themes and together go a long way toward defining what constitutes the contemporary experience of architecture and urbanism. Each is characteristically Scully — provocative, yet precise in detail and observation, written with passionate clarity. They document Scully’s seminal views on the relationship between the natural and the built environment and trace his progressively intense concern with the fabric of the street and of our communities. The essays also highlight Scully’s engagement with the careers of so many of the twentieth century’s most significant architects, from Frank Lloyd Wright and Louis Kahn to Robert Venturi.


In the tradition of great intellectual biographies, this finely made book chronicles our most influential architectural historian and critic. It is a gift to architecture and its history.

"Scully . . . may find a place among the gallery of distinguished American critics . . . for his historically grounded but engaged architectural criticism. That possibility is enhanced by the well-chosen essays in this volume. Not only did Neil Levine make an excellent selection, he also provided a brief but illuminating biographical essay tracing Scully's career. Better yet, the headnotes he has written for each of Scully's essays are themselves gemlike mini-essays."—Thomas Bender, The Nation

"Vincent Scully is surely one of the most influential architectural historians and critics of the twentieth century. . . . None of the essays included here are available in Scully's (more than 15) published books. Interestingly, I think the selection will work well both for readers familiar with Scully and his work, as well as for those to whom his writing will be new territory. . . . The very best thing about this book is the wonderful quality of Scully's writing itself—clear, learned and witty."—Victoria Keller, The Art Book

"Many of the texts, which span the years 1954 to 1999, were previously published only in magazines and have thus effectively been out of print. They cover the 20th century's mainstream trends, from the birth pangs of Frank Llyod Wright's Prairie Style to the death throes of postmodernism. All are fiercely opinionated."—Eve M. Kahn, ArtNews

"Scully ranks among the most influential architectural historians of the 20th century. . . . [T]his anthology is a wonderful source for anyone with a keen interest in architecture. No one living has written on the subject in a more eloquent and compelling way."—Choice

"Covering diverse themes from Classicism to Le Corbusier and Frank Lloyd Wright to suburbia, each essay is telling in its own right, But whatever the ostensible theme, almost every one charts a growing awareness of Modernism's complex roots and relationships to tradition."—Jeremy Melvin, Architectural Review

"[These essays] provide wide-ranging insights into the architectural thought of the past half-century by a central figure."—Richard Guy Wilson, Architectural Record

"[An] overdue and welcome anthology. Scully owes his reputation to an authorial voice that is as arresting in the classroom as the printed page. In lecture, it is the elegant literary and formal precision that startles; on the printed page, the intimate spoken quality."—Michael Lewis, Journal of the Society of Architectural Historians

"Reading [this book], one sees quickly why Vincent Scully (now emeritus) was such a popular lecturer, a charismatic professor whose influence extended broadly throughout the architectural profession and the academy. . . . Scully's writing bears comparison with [the] elevation of the esthetic to an almost religious level, and his particular approach to the architectural object—which he regards ideally both as internally coherent and as somehow 'corresponding' with reality itself—is very much in keeping with the New Criticism."—Tom McDonough, Art in America

"This book is long overdue. The absence of a comprehensive collection of Scully's work has left the field unfortunately—even suspiciously—unbalanced. His writings are important for their immediate impact and for their enduring lessons. The book will appeal to practicing architects and architectural historians, but it is also a major contribution to general cultural history that should attract audiences far outside architecture."—Michael Hays, Harvard University

"I greet this book with great pleasure. Neil Levine's editorial commentary adds immeasurably to the appreciation that this and future generations will take in reading Vincent Scully's remarkable and remarkably influential writings."—Robert Stern, Yale University