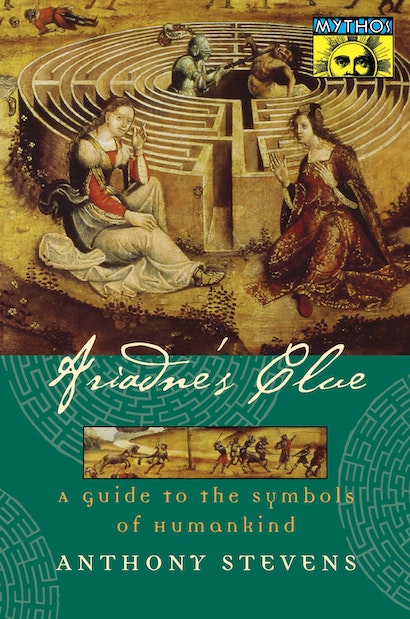 Symbolism is the most powerful and ancient means of communication available to humankind. For centuries people have expressed their preoccupations and concerns through symbolism in the form of myths, stories, religions, and dreams. The meaning of symbols has long been debated among philosophers, antiquarians, theologians, and, more recently, anthropologists and psychologists. In Ariadne’s Clue, distinguished analyst and psychiatrist Anthony Stevens explores the nature of symbols and explains how and why we create the symbols we do.


The book is divided into two parts: an interpretive section that concerns symbols in general and a “dictionary” that lists hundreds of symbols and explains their origins, their resemblances to other symbols, and the belief systems behind them. In the first section, Stevens takes the ideas of C. G. Jung a stage further, asserting not only that we possess an innate symbol-forming propensity that exists as a creative and integral part of our psychic make-up, but also that the human mind evolved this capacity as a result of selection pressures encountered by our species in the course of its evolutionary history. Stevens argues that symbol formation has an adaptive function: it promotes our grasp on reality and in dreams often corrects deficient modes of psychological functioning. In the second section, Stevens examines symbols under four headings: “The Physical Environment,” “Culture and Psyche,” “People, Animals, and Plants,” and “The Body.” Many of the symbols are illustrated in the book’s rich variety of woodcuts. From the ancient symbol of the serpent to the archetypal masculine and feminine, from the earth to the stars, from the primordial landscape of the savannah to the mysterious depths of the sea, Stevens traces a host of common symbols back through time to reveal their psychodynamic functioning and looks at their deep-rooted effects on the lives of modern men, women, and children.

Anthony Stevens has worked as a Jungian analyst and psychiatrist for the past thirty years. He is a graduate of the University of Oxford and, in addition to his medical degree, he has two degrees in psychology. His previous books include Archetype: A Natural History of the Self, The Roots of War, On Jung, The Two-Million-Year-Old Self, Jung, Private Myths: Dreams and Dreaming, and, with John Price, Evolutionary Psychiatry: A New Beginning.

"This is a fascinating book, packed with ideas and out-of-the-way information. . . . a thesaurus of symbols. [Stevens] aim[s] to provide clues to the origin, meaning, and development of some of the most common symbols and, like Ariadne's thread, to trace connections between different parts of what seems like an impenetrable maze."—John Habgood, The Times Higher Education Supplement

"What sets this book apart from many others . . . is Stevens's viewpoint. He approaches symbols as an evolutionary psychologist . . . one who seeks to understand the biological reasons underlying our symbols. . . . [This] would be of interest to anyone who tries to understand themselves, whether they do it by biology, psychology, astrology, or tarot. The symbols are always there."—David Smillie, Discovery Channel

"One need not be a Jungian to appreciate this fine book both as a reference and a contemporary introduction to symbolism. A brilliant integration of psychological archetypes with Darwinian theory. . . . Stevens presents vast learning easily and precisely in prose that is at once calm and exciting. . . . [A] standard—if not the standard—in the field; essential for most libraries."—Library Journal

"Stevens has a unique capacity for relating myths and symbols to the way our psyches function today, thus bringing symbols alive rather than dismissing them as historical curiosities. He is also a stylish writer, and is able to link his conclusions from a variety of fields into a consistent, readable whole."—Anthony Storr, University of Oxford