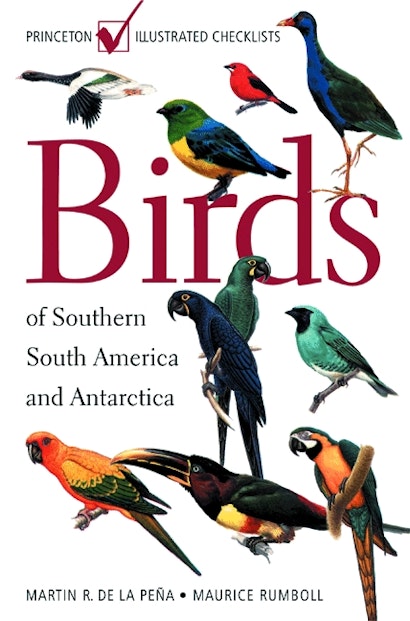 South America, though home to about one-third of the world’s bird species and twice as many endemic families of birds as any other continent, has the world’s sparsest population of birdwatchers. Birds of Southern South America and Antarctica illustrates and describes all the known species — more than 1,000 of them — in a vast swath of this underexplored birder’s paradise, from Argentina, Chile, Bolivia, Paraguay, southern Brazil, and Uruguay to parts of Antarctica. Just some of the birds it covers are teals, tinamous, chachalacas, conebills, cuckoos, macaws, parakeets, parrots, penguins, nightjars, hummingbirds, ovenbirds, tyrants, and tanagers. The habitats range from torrid rainforests and cloudforests to grasslands, the world’s driest desert, second highest mountain range, and ice caps.


The 97 color plates depict each species’ male in breeding plumage, with the female and young often shown as well. On the facing page are concise textual descriptions of each species, highlighting not only salient physical features and behavioral patterns but the calls or songs of each. Casual birders and ornithologists contemplating a journey to the region, or simply interested in a one-volume overview of its bird life, will not want to miss this book.

Martín R. de la Peña, a veterinarian and ornithologist, studies the reproduction of birds, on which he has published three books, alongside a dozen others, in his native Argentina. He has also produced several films on the life of birds. Maurice Rumboll, one of Argentina's top naturalists, directs environmental education programs for students and plans interpretive trails, brochure texts, and visitor centers for his country's National Park Administration, whose Ranger Training Institute he formerly headed. Previously he directed visitors' services and research at Iguazú National Park and served as Traveling Naturalist for the Argentine Museum of Natural History.

"[A]n outstanding field guide that covers a vast geographic area and includes a wealth of information for more than 1,100 species of birds. . . . It should be purchased by anybody interested in the birds of southern South America."—Floyd E. Hayes, Auk