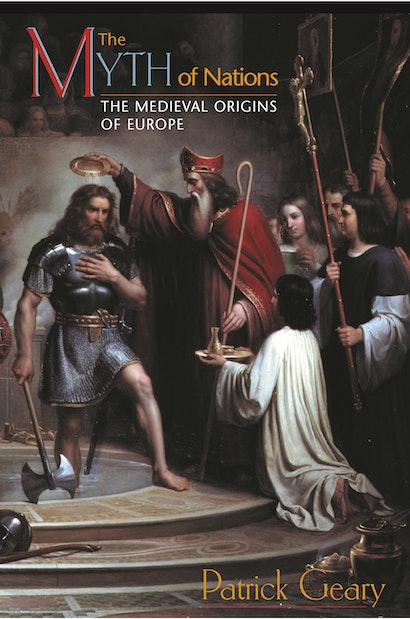 Modern-day Europeans by the millions proudly trace back their national identities to the Celts, Franks, Gauls, Goths, Huns, or Serbs — or some combination of the various peoples who inhabited, traversed, or pillaged their continent more than a thousand years ago. According to Patrick Geary, this is historical nonsense. The idea that national character is fixed for all time in a simpler, distant past is groundless, he argues in this unflinching reconsideration of European nationhood. Few of the peoples that many Europeans honor as sharing their sense of ”nation” had comparably homogeneous identities; even the Huns, he points out, were firmly united only under Attila’s ten-year reign.

Geary dismantles the nationalist myths about how the nations of Europe were born. Through rigorous analysis set in lucid prose, he contrasts the myths with the actual history of Europe’s transformation between the fourth and ninth centuries — the period of grand migrations that nationalists hold dear. The nationalist sentiments today increasingly taken for granted in Europe emerged, he argues, only in the nineteenth century. Ironically, this phenomenon was kept alive not just by responsive populations — but by complicit scholars.

Ultimately, Geary concludes, the actual formation of European peoples must be seen as an extended process that began in antiquity and continues in the present. The resulting image is a challenge to those who anchor contemporary antagonisms in ancient myths — to those who claim that immigration and tolerance toward minorities despoil ”nationhood.” As Geary shows, such ideologues — whether Le Pens who champion ”the French people born with the baptism of Clovis in 496” or Milosevics who cite early Serbian history to claim rebellious regions — know their myths but not their history.

The Myth of Nations will be intensely debated by all who understood that a history that does not change, that reduces the complexities of many centuries to a single, eternal moment, isn’t history at all.

Patrick J. Geary is Professor of History at the University of California at Los Angeles. He is the author of Phantoms of Remembrance: Memory and Oblivion at the End of the first Millennium (Princeton), Living with the Dead in the Middle Ages, and Furta Sacra: Thefts of Relics in the Central Middle Ages (Princeton).

"Geary's lucid and expert examination of the circumstances in which . . . stories and identities were created . . . offers a satisfying and . . . often a subtle approach to some of the most elusive aspects of a complicated period. Its methodology is brilliantly and persuasively vindicated."—R.I. Moore, Times Literary Supplement

"In this compelling historical treatise, Geary debunks the myth that modern European national and ethnic groups can be traced to distinct ancient or early medieval peoples. . . . [H]is arguments are important in light of the nationalistic excesses of the 20th century, and his conclusions are sure to provoke controversy among scholars."—Publishers Weekly

"An admirable survey of a complicated and important subject."—Kelly McFall, History: Review of Books

"Patrick Geary's The Myth of Nations is more timely than he could have anticipated. . . . Since 1989, this period—between the third and eighth centuries—has been persistently misrepresented by Europe's nationalist and racist populations, who claim to find in the Middle Ages some kind of justification for their policies. . . . Demythologizing the early Middle Ages entails first understanding how the myths were created in the 19th century. Geary is blunt ... it is impossible to map linguistic or ethnic identities onto national territories. . . . Ethnicity is 'impervious to mere rational disproof.' This is why Geary's message is so compelling, and why it matters to keep faith with reason: getting Europe's medieval past straight gives a bearing on its future."—J.L. Nelson, London Review of Books

"A book of the best possible originality. It presents a theme that has been hotly debated in modern scholarly circles with a novel freshness, while drawing the attention of the reader to the urgent relevance of such debates to the history of modern Europe. This is a book of quite exemplary clarity. It deserves to be widely read and will doubtless spark off lively discussion among scholars."—Peter Brown, Princeton University