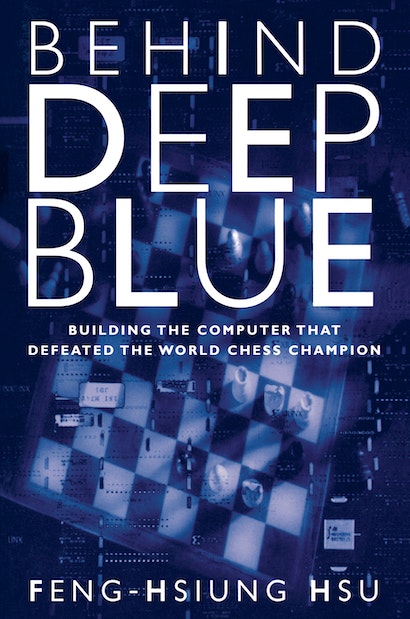 On May 11, 1997, as millions worldwide watched a stunning victory unfold on television, a machine shocked the chess world by defeating the defending world champion, Garry Kasparov. Written by the man who started the adventure, Behind Deep Blue reveals the inside story of what happened behind the scenes at the two historic Deep Blue vs. Kasparov matches. This is also the story behind the quest to create the mother of all chess machines. The book unveils how a modest student project eventually produced a multimillion dollar supercomputer, from the development of the scientific ideas through technical setbacks, rivalry in the race to develop the ultimate chess machine, and wild controversies to the final triumph over the world’s greatest human player.


In nontechnical, conversational prose, Feng-hsiung Hsu, the system architect of Deep Blue, tells us how he and a small team of fellow researchers forged ahead at IBM with a project they’d begun as students at Carnegie Mellon in the mid-1980s: the search for one of the oldest holy grails in artificial intelligence — a machine that could beat any human chess player in a bona fide match. Back in 1949 science had conceived the foundations of modern chess computers but not until almost fifty years later — until Deep Blue — would the quest be realized.


Hsu refutes Kasparov’s controversial claim that only human intervention could have allowed Deep Blue to make its decisive, “uncomputerlike” moves. In riveting detail he describes the heightening tension in this war of brains and nerves, the “smoldering fire” in Kasparov’s eyes. Behind Deep Blue is not just another tale of man versus machine. This fascinating book tells us how man as genius was given an ultimate, unforgettable run for his mind, no, not by the genius of a computer, but of man as toolmaker.

Feng-hsiung Hsu is the founding father of the Deep Blue project. He began it in 1985 as a graduate student at Carnegie Mellon University. From 1989 to 1997 he worked as the system architect and chip designer for the Deep Blue Chess machine at IBM's T. J. Watson Research Center. He is now a senior researcher at Microsoft Research Asia.

"Mr. Hsu manages to make seemingly dry, technical material vivid and gripping, even for readers without a background in chess or computers. And his story is a fascinating study, of men as well as machines."—Christopher F. Chabris, The Wall Street Journal

"Hsu's account is written in an easy, flowing style, and, as he says, it is rather light-hearted. . . . The point that Hsu makes is that building and programming a computer that can calculate 2 million chess moves a second is not frivolous . . . All science is a kind of play, in the sense of a play of mind. . . . Most of Behind Deep Blue is Hsu's tale of encountering and overcoming obstacles in the design and programming of the computer to enable it to play chess like a human being. The technical aspects of both computers and chess will be fully comprehensible only to those with the appropriate experience and skill. The human story, though, is clear and exciting: dversity encountered, challenges met, all with the human elements of pride and anxiety and triumph. And the human elements, too, of anger and resentment."—Anthony Day, Los Angeles Times

"This book tells the gripping story of the construction, programming, preparation and use of the Deep Blue chess machine and its predecessors. It proves on every page the author's claim that computer scientists are human too, and they do like to have fun. The fun will be shared by the reader who has no prior knowledge of chess or of computer science."—Tony Hoare, Times Higher Education Supplement

"A chess-playing machine rather than a mere program, Deep Blue drew its awesome power from chips designed by Hsu to do nothing but play chess. The IBM team put 256 of these processors into a supercomputer, allowing it to analyze at least 100 million chess positions a second."—Nell Boyce, U.S. News and World Report

"A fascinating account of the IBM computer and the match, written by its programmer."—Lubomir Kavalek, The Washington Post

"This is a fascinating insight into the machinations and science that went into the now dismantled chess program which defeated Kasparov in 1997."—Raymond Keene, The Spectacle

"An intelligent, well-written account of a milestone in the history of computer science that stands out from the other books on Deep Blue. . . . Hsu's account goes beyond the tyupical man vs. machine angle and attempts to capture the true essence of the contest between men in two distinct roles: Kasparov as performer and Hsu's team as toolmaker."—Library Journal

"[Hsu's] conversational narrative takes us from school days in Taiwan through his graduate studies at Carnegie-Mellon University to his team's triumph in Deep Blue's second match against Garry Kasparov. . . . Hsu spins an intriguing behind-the-scenes tale of how he and his Deep Blue team prevailed."—Lee Gaillard, San Francisco Times

"Hsu's enthusiasm and expertise allow him to ease into the role of storyteller, and his personal narrative is colored with details that make, surprisingly, for a thrilling page turner."—Elizabeth Armstrong, Christian Science Monitor

"Mr. Hsu began trying to solve "The Computer Chess Program" in 1985 while a graduate student at Carnegie Mellon University. His narrative of those early days is as riveting as the details of the victory over Mr. Kasparov. It is not easy to make a discussion of computer chip design palatable to non-nerds. But the electronic intricacies of Mr. Hsu's rewiring of Deep Blue's hardware are explained in the context of university and chess world politics. By blending technical descriptions into the real-life daily dramas confronting the project, Mr. Hsu makes the trip exciting."—Doug Bedell, The Dallas Morning News

"A byte-by-byte account of the successful effort of IBM computer scientists to create a machine that could defeat a genius. . . . Hsu strives admirably to avoid geek-speak (he tells us what cursors and pawns are), and readers who speak neither computer-ese nor chess-ian can still enjoy the building tension. . . . A real-life Revenge of the Nerds, the tale captures some of the excitement of the day when a machine took a man to the woodshed."—Kirkus Reviews

"Hsu . . . was the system architect for Deep Blue. He makes an exciting tale of computer chess evolution and the Kasparov match."—Scientific American

"Mr. Hsu got my attention and kept it, though, bringing this strange story to life with a fluent, modest style, some side excursions into academic politics, a dash of wit, and riveting accounts of the games—and the gamesmanship—that led up to the May 1997 victory. . . . Part of this book's particular charm is that Mr. Hsu is level-headed about what he and his colleagues accomplished."—John Derbyshire, New York Sun

"By building both a winning program and a machine capable of running it, the IBM team realized a dream dating back to at least 1956.. . . Here is a blow-by-blow account of that extraordinary quest for technoglory, written by a man who participated in every phase of it."—James Case, SIAM News

"This is a story of the search for one of the oldest holy grails in artificial intelligence—a machine capable of beating any human chess player in a bona fide match. . . . It also exquisitely captures the very human dimension and is a page-turner not to be missed."—Choice

"[A] vivid, intimate portrayal of personal toil and triumph. Behind Deep Blue is warm, humorous and insightful. . . . Hsu . . . shows the reality of scientific exploration, warts and all, chronicling the obsessiveness, competitiveness and costly mistakes that mark most research (along with, of course, the thrills, fun and camaraderie)."—Jonathan Schaeffer, American Scientist

"Feng-hsiung Hsu, who masterminded Kasparov's match play defeat by a computer, tells his story. A nerdy book might be expected, delving into arcane topics (computer chip design, programming, chess), but instead we have something more like 'Indiana Jones and the Holy Grail.' No specialist knowledge is demanded. The author's adventures with phantom queens, etc. are fascinating. His will-to-win matched that of the legendary Kasparov."—Ken Whyld, Editor of the Oxford Companion to Chess

"I don't play chess; never have. Most research, as Edison said, is 90% perspiration and 10% inspiration—not exciting to watch. Thus, I did not have high hopes for Behind Deep Blue. Wrong! It's a page-turner! Even if you don't follow the technical details of chip design or chess, Hsu has captured the very human dimension exquisitely! It's a great story!"—William A. Wulf, President of the National Academy of Engineering, AA&M Professor of Computer Science, University of Virginia