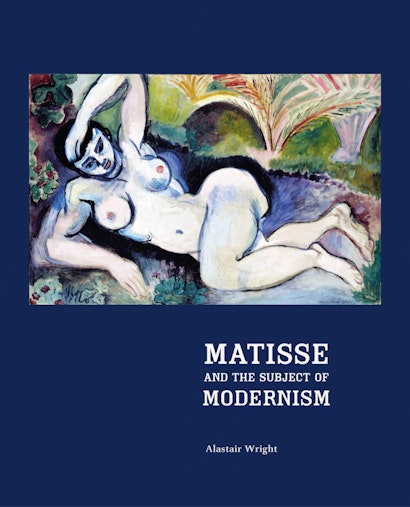 Focusing on the period 1905-1913, this provocative and groundbreaking new book refutes the popular view of Matisse as the painter of relaxed pleasures, the master of decorative line and sensuous color. Alastair Wright discovers a darker, more complex side to Matisse: an artist whose work, caught in the uneasy space between modernism and tradition, was fundamentally engaged with the most pressing of modernity’s artistic and ideological debates. Presenting a series of brilliant and highly original analyses of Matisse’s most important early paintings, Wright locates the artist within a wider cultural field in which the identities of modernism — and of its viewers — were highly contested. Wright offers a penetrating examination of the public response to Matisse’s work, arguing that his early-twentieth-century audience found in his painting a deeply disturbing challenge to contemporary concepts of the self, of the nation, and of the West.


This sumptuously illustrated book positions the work of Matisse and a number of his contemporaries in relation to key aspects of modernity — the commodification of the individual, the dislocation of cultural identity, and the effacement of racial boundaries under the pressure of imperial expansion — and provides a compelling account of how these contradictory historical materials fused to give birth to Matisse’s modernism. What emerges is a renewed sense of the rich complexity of an artistic practice suspended between the seductive potential of pure color and an always ambivalent engagement with tradition. Tracing the interplay between Matisse’s painting and discourses of art and subjectivity, Wright offers a significant new reading of one of the central figures of early-twentieth-century modernism.

"A book like Alastair Wright's Matisse and the Subject of Modernism is enough to rekindle my faith in the future of art history as a discipline. . . . [I]t manages to cast entirely new light on Matisse's best-known works of the period from 1905-13."—Yve-Alain Bois, ArtForum

"This book offers fresh insights and interpretations and uncovers new critical materials while utilizing novel theoretical perspectives. It will be essential reading not only for all scholars of Matisse and of Fauvism and early-twentieth-century art, but also readers with an interest in French cultural history and pre-World War I society. Art historians who seek models for utilizing contemporary criticism and theoretical perspectives in connection with studies of individual works will also find much of value here."—Tamar Garb, University College London

"Complex and ambitious, this book will be of great interest to students and scholars of modern art and, more broadly, to anyone interested in revisionist approaches to early twentieth-century culture. It combines high standards of research, sophistication of method, and a sustained commitment to its central thesis: that Matisse's Fauve paintings, routinely considered to be canonical and beautiful, should be appreciated for the subversive challenge they offer to a coherent view of modernism."—John Klein, author of Matisse Portraits