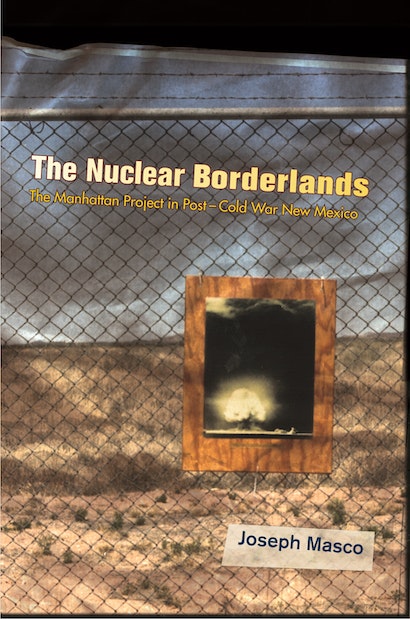 The Nuclear Borderlands explores the sociocultural fallout of twentieth-century America’s premier technoscientific project — the atomic bomb. Joseph Masco offers the first anthropological study of the long-term consequences of the Manhattan Project for the people that live in and around Los Alamos, New Mexico, where the first atomic bomb, and the majority of weapons in the current U.S. nuclear arsenal, were designed. Masco examines how diverse groups — weapons scientists at Los Alamos National Laboratory, neighboring Pueblo Indian Nations and Nuevomexicano communities, and antinuclear activists — have engaged the U.S. nuclear weapons project in the post-Cold War period, mobilizing to debate and redefine what constitutes “national security.”


In a pathbreaking ethnographic analysis, Masco argues that the U.S. focus on potential nuclear apocalypse during the Cold War obscured the broader effects of the nuclear complex on American society. The atomic bomb, he demonstrates, is not just the engine of American technoscientific modernity; it has produced a new cognitive orientation toward everyday life, provoking cross-cultural experiences of what Masco calls a “nuclear uncanny.” Revealing how the bomb has reconfigured concepts of time, nature, race, and citizenship, the book provides new theoretical perspectives on the origin and logic of U.S. national security culture. The Nuclear Borderlands ultimately assesses the efforts of the nuclear security state to reinvent itself in a post-Cold War world, and in so doing exposes the nuclear logic supporting the twenty-first-century U.S. war on terrorism.

Joseph Masco is Assistant Professor of Anthropology at the University of Chicago.

"Masco's important and impressive study ably demonstrates that nuclear weapons need not be detonated to have profound effects—effects that extend far beyond the well-studied realms of politics and international relations."—David Kaiser, American Scientist

"Masco seems to have taken to heart the tension between anthropology and science studies: on the one hand science studies too often fails in its understanding of what long-term intensive fieldwork can do; on the other anthropology too often fails to get directly into the heart of science and technology the way it always has language, spirituality, and economy. Masco's book is fusion (that impossible goal of our nuclear culture) of the best kind."—Christopher Kelty, Savage Minds

The Nuclear Borderlands alters the meaning of 'ethnography' in a way that will challenge all of us in anthropology. It will certainly take its place among the classic texts assessing the cultural politics of the bomb, and it will join the must-read ranks in the literature on American nationalism and nation-making in the late twentieth century."—Susan Harding, University of California, Santa Cruz, author of The Book of Jerry Falwell and Remaking Ibieca

"No account of the post Cold War environment can afford to ignore this study and the tangle of economic, political, and cultural rights, interests, and imperatives it maps. Joe Masco pushes the ethnographic agenda firmly forward into an ambivalent twenty-first century, where Los Alamos is both dangerous polluter and lifeline employer, where rival eco-cultures, ethnicities, and social hierarchies fight over control of nature, and where the technological future can exacerbate or redeem the nuclear past. Neither antinuclear environmentalists, nor Native Americans, nor Nuevomexicanos, nor the Los Alamos scientists, nor the Washington politicians have a monopoly on the answers, and Masco shows us why."—Michael M. J. Fischer, Massachusetts Institute of Technology, author of Emergent Forms of Life and the Anthropological Voice

"Joseph Masco's argument that nuclear weapons are no longer a technology subject to scientific challenge but rather exist primarily as powerful cultural constructs takes us a long way toward understanding post-Cold War continuities in U.S. security strategies, as well as some of the astounding aspects of American exceptionalism in international politics."—John Borneman, Princeton University