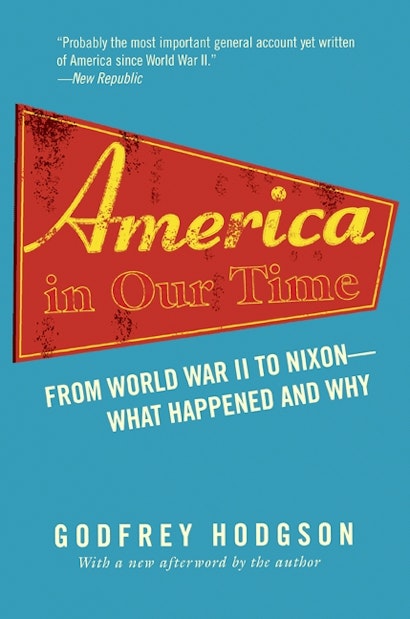 America in Our Time is a history of the turbulent years between the end of World War II and the fall of Richard Nixon. Focusing on the 1960s, the book debunks some of the myths about that much misremembered decade. Godfrey Hodgson pioneers the idea that in the 1950s a “liberal consensus” governed American politics, by which conservatives accepted the liberal domestic policy of the welfare state, while all but a few liberals shared the conservative foreign policy of Cold War “containment.?

The book shows in rich detail how that consensus was shattered by the converging blows of racial upheaval, the Vietnam War, and a pervasive crisis of authority in American society, all the way from the family to the White House, opening the way for a new conservatism. Hodgson has added an afterword that looks back at the events covered in the book from the perspective of almost thirty years since it was published.

Godfrey Hodgson is Associate Fellow at the Rothermere American Institute at the University of Oxford, where he was the director of the Reuters Foundation Programme for eight years. He is the author of numerous books, including More Equal Than Others (Princeton). Hodgson is a former foreign correspondent for British newspapers and a television anchor for British news services who has worked in forty-eight of the fifty states.

"Praise for the previous edition: "A critique so stimulating and compelling that I can only say read it.""—Richard R. Lingeman, New York Times

"Praise for the previous edition: "[This book] simply gets right, without great fuss, the detail and proportion of things like the civil rights movement, student unrest, the stages of our Vietnam engagement.""—Garry Wills, New York Review of Books

"Praise for the previous edition: "Probably the most important general account yet written of America since World War II.""—Paul Starr, New Republic