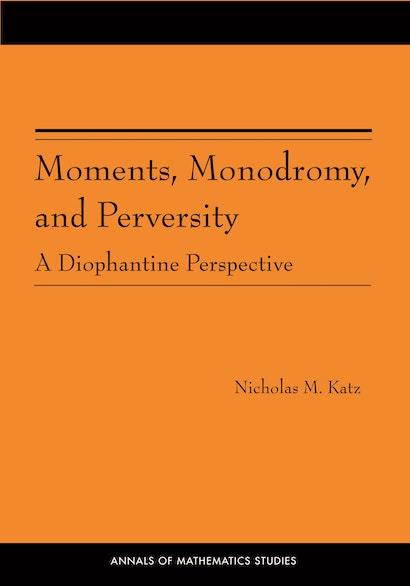 It is now some thirty years since Deligne first proved his general equidistribution theorem, thus establishing the fundamental result governing the statistical properties of suitably “pure” algebro-geometric families of character sums over finite fields (and of their associated L-functions). Roughly speaking, Deligne showed that any such family obeys a “generalized Sato-Tate law,” and that figuring out which generalized Sato-Tate law applies to a given family amounts essentially to computing a certain complex semisimple (not necessarily connected) algebraic group, the “geometric monodromy group” attached to that family.


Up to now, nearly all techniques for determining geometric monodromy groups have relied, at least in part, on local information. In Moments, Monodromy, and Perversity, Nicholas Katz develops new techniques, which are resolutely global in nature. They are based on two vital ingredients, neither of which existed at the time of Deligne’s original work on the subject. The first is the theory of perverse sheaves, pioneered by Goresky and MacPherson in the topological setting and then brilliantly transposed to algebraic geometry by Beilinson, Bernstein, Deligne, and Gabber. The second is Larsen’s Alternative, which very nearly characterizes classical groups by their fourth moments. These new techniques, which are of great interest in their own right, are first developed and then used to calculate the geometric monodromy groups attached to some quite specific universal families of (L-functions attached to) character sums over finite fields.

Nicholas M. Katz is Professor of Mathematics at Princeton University. He is the author of five previous books in this series: Arithmetic Moduli of Elliptic Curves (with Barry Mazur); Gauss Sums, Kloosterman Sums, and Monodromy Groups; Exponential Sums and Differential Equations; Rigid Local Systems; and Twisted L-Functions and Monodromy.