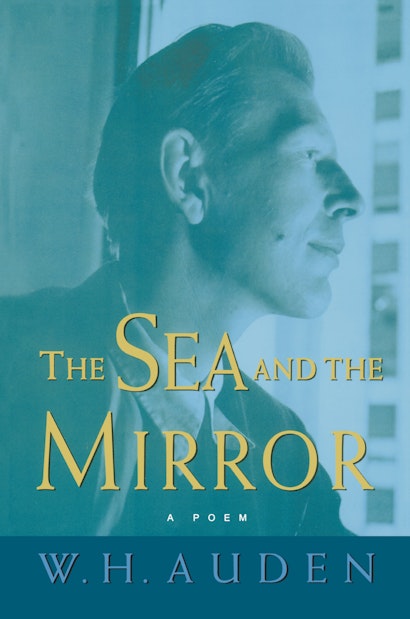 Written in the midst of World War II after its author emigrated to America, “The Sea and the Mirror” is not merely a great poem but ranks as one of the most profound interpretations of Shakespeare’s final play in the twentieth century. As W. H. Auden told friends, it is “really about the Christian conception of art” and it is “my Ars Poetica, in the same way I believe The Tempest to be Shakespeare’s.” This is the first critical edition. Arthur Kirsch’s introduction and notes make the poem newly accessible to readers of Auden, readers of Shakespeare, and all those interested in the relation of life and literature — those two classic themes alluded to in its title.

The poem begins in a theater after a performance of The Tempest has ended. It includes a moving speech in verse by Prospero bidding farewell to Ariel, a section in which the supporting characters speak in a dazzling variety of verse forms about their experiences on the island, and an extravagantly inventive section in prose that sees the uncivilized Caliban address the audience on art — an unalloyed example of what Auden’s friend Oliver Sachs has called his “wild, extraordinary and demonic imagination.”

Besides annotating Auden’s allusions and sources (in notes after the text), Kirsch provides extensive quotations from his manuscript drafts, permitting the reader to follow the poem’s genesis in Auden’s imagination. This book, which incorporates for the first time previously ignored corrections that Auden made on the galleys of the first edition, also provides an unusual opportunity to see the effect of one literary genius upon another.

Arthur Kirsch, Alice Griffin Professor of English Emeritus at the University of Virginia, is the editor of Auden's Lectures on Shakespeare (Princeton).

"The Sea and the Mirror is the most brilliant and unsettling of the four long poems Auden composed during his furiously industrious first decade in America . . . an intriguing mixture of the theatrical and the poetic. . . . [It] represents his most determined and considered attempt to 'grow up,' but it moves most by its failure to do so."—Mark Ford, New York Review of Books

"[An] excellent and beautifully produced edition. . . . The Sea and the Mirror has ambitions far above those which the modest label of 'A commentary' might suggest, and it attempts to clarify an entire aesthetic, both for the poet himself and (on a more abstract level) for all poetry and art in its relation to reality. Nor was this a question of aesthetics only, for Auden was determined that this work should offer a distinctively Christian philosophy of art, one which could announce, and validate, an entirely new depth and seriousness to his own life and writing."—Peter McDonald, Times Literary Supplement

"Even for those of us whose minds aren't particularly philosophical, The Sea and the Mirror can appeal through its language alone: It contains some of the poet's most accomplished verse, at once pellucid and delicately musical. . . . [R]ead The Sea and the Mirror—you will return to it, as with Auden's other poetry, all your life. You can find the text in various Auden collections, but you'll never regret investing in this handsome edition of these tender, heartbroken poems."—Michael Dirda, Washington Post Book World

"It is wonderful to have this new edition of The Sea and the Mirror, which I have always considered Auden's greatest work written in America and certainly one of the summits of his career. The long speech of Caliban, channeling Henry James, is in itself a marvelment."—John Ashbery

"The most significant of all Auden's unpatriotic Shakespearean forays of the 1940s, The Sea and the Mirror is a work of enormous skill, learning, and intelligence, a stylistic tour de force that is also freakish, polemical, confessional, and open-ended. It is a poem that comes much nearer to being a major salvo in Auden's cultural war with Little Englandism than it does to being the modest academic 'commentary' that on the title page it rather deviously declares itself to be. Arthur Kirsch's edition of this work is a fine addition to the canon of Auden scholarship. This book will fascinate all readers of Auden, and of Shakespeare."—Nicholas Jenkins