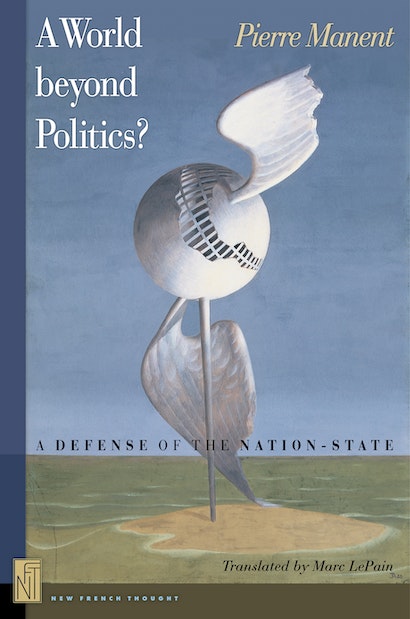 We live in the grip of a great illusion about politics, Pierre Manent argues in A World beyond Politics? It’s the illusion that we would be better off without politics — at least national politics, and perhaps all politics. It is a fantasy that if democratic values could somehow detach themselves from their traditional national context, we could enter a world of pure democracy, where human society would be ruled solely according to law and morality. Borders would dissolve in unconditional internationalism and nations would collapse into supranational organizations such as the European Union. Free of the limits and sins of politics, we could finally attain the true life.

In contrast to these beliefs, which are especially widespread in Europe, Manent reasons that the political order is the key to the human order. Human life, in order to have force and meaning, must be concentrated in a particular political community, in which decisions are made through collective, creative debate. The best such community for democratic life, he argues, is still the nation-state.

Following the example of nineteenth-century political philosophers such as Alexis de Tocqueville and John Stuart Mill, Manent first describes a few essential features of democracy and the nation-state, and then shows how these characteristics illuminate many aspects of our present political circumstances. He ends by arguing that both democracy and the nation-state are under threat — from apolitical tendencies such as the cult of international commerce and attempts to replace democratic decisions with judicial procedures.

Pierre Manent teaches political philosophy at L'École des Hautes Études en Science Sociales in Paris. His books include An Intellectual History of Liberalism and The City of Man (both Princeton).

"In this dazzling book, French political philosopher Pierre Manent tries to provide an 'impartial overview of the political order—or disorder—of today's world.' Few living thinkers could hope to pull off such an ambitious undertaking, but Manent is surely one. . . . The reader will find much . . . of interest in this heady book: meditations on egalitarianism, modern art, the French novel, sexual identity, science and faith, the French and American revolutions, the morality of international relations—on and on, all delivered in Manent's glistening prose, ably translated by Marc LePain. . . . It's an ideal introduction to political philosophy in the new millennium."—Brian C. Anderson, National Review

"By simultaneously insisting upon the (limited) intelligibility of natural, human, and political matters and remaining open to the questions that invite theological responses, Manent has already achieved a great deal and put us all in his debt."—Thomas S. Hibbs, First Things

"A World beyond Politics? is a remarkable tour d'horizon that happens to be a genuine tour de force."—James W. Ceaser, Claremont Review of Books

"Pierre Manent may be the best student of political philosophy alive, and this is probably his most penetrating, wonderful, and accessible book. A World beyond Politics? certainly deserves to be the most influential political analysis written this century so far."—Peter Augustine, Perspectives on Politics

"Pierre Manent's A World beyond Politics? is at once a reflection on modern political philosophy from Rousseau to Tocqueville to Weber and an interpretation of the modern democratic state. Manent is one of the best—maybe the best—minds on the current French scene. His thought is always alive, original, and provocative. It would not surprise me if quite a few political philosophers began to revise their introductory courses to address the themes and problems articulated in this book."—Steven B. Smith, Alfred Cowles Professor of Political Science, Yale University